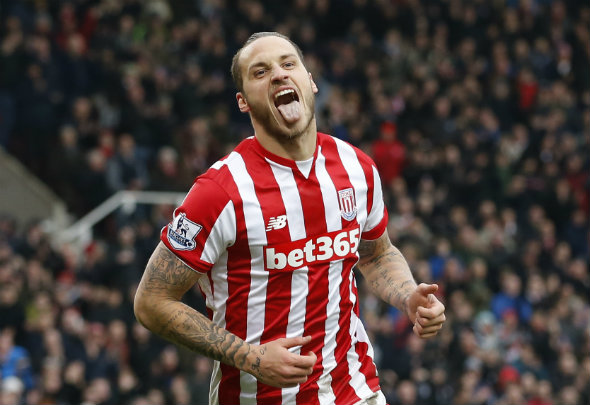 Stoke forward Marko Arnautovic is close to joining Everton, according to a report.

Sky Sports claimed on their website on Tuesday morning that the Merseysiders are working on a deal to land the Austria international.

Our colleagues at Sky in Austria are also reporting that Marko Arnautovic is close to joining @Everton. #SSNHQ pic.twitter.com/oBaCgbDk4f

Arnautovic has one-year left on his contract at Stoke but has failed to agree terms on a new deal, which has left his future at the club in major doubt.

It has been widely reported that he has a release clause of around £12.5million in his Potters contract.

Everton are keen to take advantage of the stalemate as manager Ronald Koeman looks to find a solution to bolster his attack.

Arnautovic, who usually plays wide in a front three at Stoke, has scored 19 goals and supplied 26 assists in 110 matches for the club.

The Merseysiders have turned their attention to Arnautovic after Graziano Pelle snubbed them to move from Southampton to the Chinese Super League.

Koeman wants to bolster Everton’s attacking options and find players who can partner Romelu Lukaku, who is in talks with Everton over extending his contract, as neither Arouna Kone or Oumar Niasse have looked up to the mark.

Koeman has been active in his search for players since arriving at Goodison Park this summer, but has been unsuccessful in the hunt for the likes of Pelle and most recently Axel Witsel.

The only senior player Koeman has signed to date has been veteran goalkeeper Maarten Stekelenburg.

In other Everton transfer news, the club are in a two-horse race to land a 25-year-old defender.