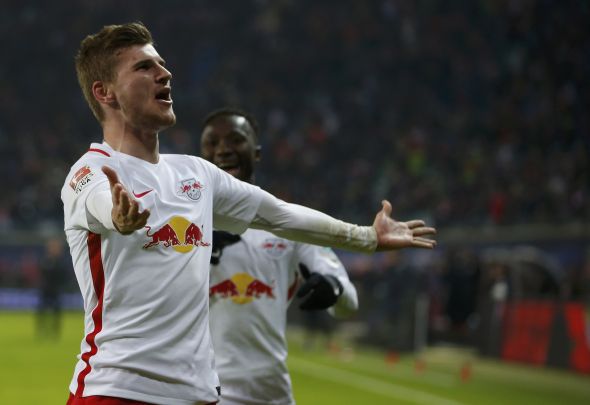 Arsenal are in the hunt for 21-year-old Red Bull Leipzig striker Timo Werner along with a host of other suitors, according to a report.
The Sun states that the £50million rated hitman is also the subject of interest from other sides in the Premier League, including Chelsea, Manchester United, and Liverpool after rejecting a new contract with the Bundesliga outfit.
Arsene Wenger is said to have had representatives from the club present at the German side’s Europa League 3-1 victory against Napoli on Thursday night – in a match where he scored two of the goals.
Werner has already bagged 17 goals in 31 appearances across all competitions and was the top scorer in the Bundesliga last season.
He has scored three goals in six Champions League appearances this season.
Football Insider verdict:
It is easy to see why the 21-year-old hitman is attracting such interest – in the Confederations Cup in 2017 he was awarded the Golden Boot award and he manages to find the back of the net every 1.82 games. Werner though has already played Champions League football with Leipzig and that taste he already has in Europe’s top competition means he is unlikely to move anywhere that cannot offer him that. He is a German international at senior level and has played ten times for his country so it is clear that this is a player who is set for greater things – Arsenal may be considered a step down for him and unless Sven Mislintat can work his magic on the forward he will be going elsewhere.
In other Arsenal transfer news, Wenger set for transfer u-turn over club captain after Gunners tabled offer.
Don’t miss out on breaking and exclusive Tottenham news by clicking here for our brilliant 24/7 updates on Facebook, Instagram and YouTube.