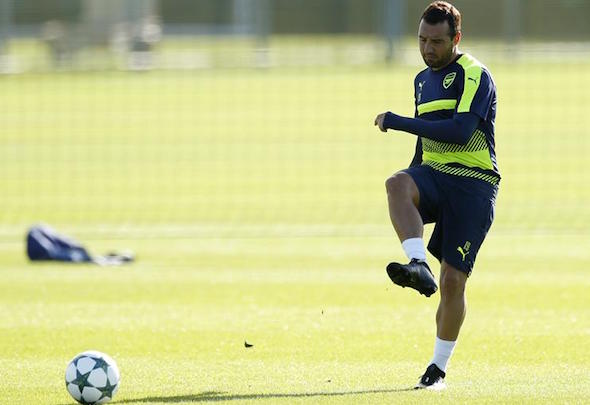 Arsenal midfielder Santi Cazorla has been out of action for some time due to recurrent foot and Achilles tendon injuries, operations, and a subsequent infection.

But when the Gunners ace was spotted pre semi-final v Atletico Madrid out on the Emirates pitch doing some light moves, it led to a wave of adulation from supporters.

The Spanish international has been sorely missed, particularly in this most mediocre of campaigns and is exactly the type of player they could have done with against Diego Simeone’s well structured and organised defence.

His ingenuity coupled with his ability to pick out a player could have unlocked the La Liga side’s rearguard, ultimately putting the Gunners in a better position going into the second-leg.

But the 33-year-old has not made a single appearance for the North Londoners this season after making a total of 11 in the previous campaign and with the player’s contract up at the end of the season, it’s not known where his future lies.

Judging by some of the responses from supporters of the Premier League outfit, they will be hoping the former Malaga ace stays on in the capital under new management whoever may be the new Gunners boss with Arsene Wenger set to leave the club after 22 years.

Here is a round-up of reactions from Arsenal fans clearly ecstatic to see that he could be nearing a return:

In other Arsenal news, ‘Jesus’, ‘A backbone’ – Arsenal fans all saying the same thing after huge Wenger revelation.