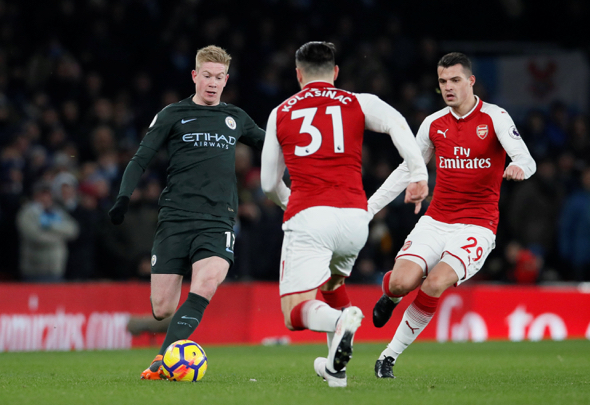 It was yet more misery for Arsenal against Man City, this time at the Emirates as the league leaders blew the Gunners away at a half-empty stadium.

The weather kept some Arsenal fans away, the rest stayed away at protest over the team’s display at Wembley on Sunday.

And if the stay-aways were watching at home they’ll be glad they did as Man City cruised to a 3-0 lead at half-time.

Sead Kolasinac was at fault for the first goal and didn’t look comfortable ay any point in the first 45 minutes.

And fans took to Twitter to slate the defender, who’s struggled to get in the Arsenal first team regularly this season.

One fan said he came with the reputation as being one of the best left-backs in the league and he’s actually one of the worst.

He didn’t have a lot to do in the second half, but then no-one did as City took their foot off the gas and Arsenal were simply incapable of mounting a challenge.

Here are the best reactions to a worrying display from Kolasinac:

How can kolasinac show him on his left foot, he is the worst left back in the league…..fact

We sold Gibbs for Kolasinac. Tears in my eyes.

Kolasinac doesn't seem up to it, Xhaka has proved he isn't, Kos is on his last legs, even our better players just look drained and worn down. Club needs a shot in the arm

First goal, Kolasinac was at fault. He should have known that Bernardo guy can only shoot with left foot. Second, Bellarin. Third, Bellarin. Koscielny has lost been so poor with positioning and distribution. Mustafi played like a veteran soon to be retired footballer. Shambles.

It is pathetic. For Bernardo's goal, why is Kolasinac letting him cut inside on his left foot for a clear shot on goal? Why is Xhaka commiting recklessly and leaving us exposed whenever Sane drives at him? And why can't Bellerin mark his man properly?

They played some nice stuff at the end of the half. City are scary good though. Doesn't help that Kolasinac looks like he's playing in quicksand though lol.

Kolasinac came as a world class right back. He is becoming the worst. Mustafi was class at Valencia, he turned into a useless defender. Aubameyang is fast loosing his class and touch

What happened to Kolasinac, at first he was the best player in the team, now he is among the worse players. #wengereffect