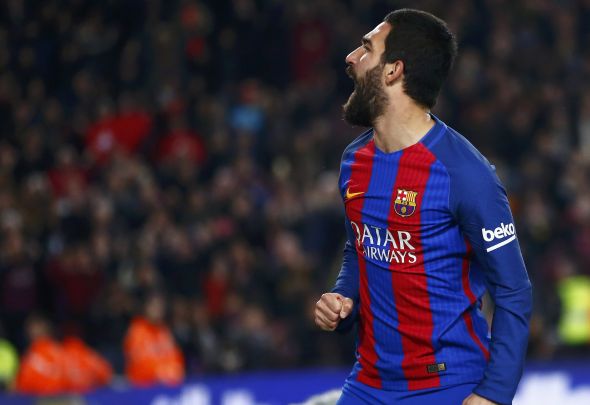 Arsenal are plotting a £25million bid to bring Barcelona playmaker Arda Turan to the Emirates, according to a report.

The Times claim that Turan will be brought in to replace Mesut Ozil, as the north London club looks resigned to losing the German, along with top scorer Alexis Sanchez in the summer.

Fans will not be happy though. The midfield schemer is already 30 years of age and struggling to impress at the Nou Camp, where he’s struggled to make an impact in the squad.

The former Atletico Madrid ace has fallen down the pecking order under manager Luis Enrique this term, following the signing of Portugal international Andre Gomes.

Ivan Rakitic, Sergio Busquets and Andres Iniesta provide fierce competition, and Turan has only managed 13 league starts this season, after a disappointing 15/16 campaign.

Now, Turan could be offloaded by the Spanish giants with the report claiming Barca are likely to rebuild in the summer.

It is reported that Wenger is a long-term admirer of Turan and tried to lure him to Arsenal before Barcelona prised him away from Atletico.

Barca’s number seven has a contract at the Nou Camp until the summer of 2020, but could be the next big-name player through the doors of the Emirates Stadium.

In a move that goes against Wenger’s normal transfer policy of buying players at a younger age, Turan is a signing that will not appease all the angry Arsenal fans. He has lost a yard of pace in recent seasons and it has been noticed at Barca. His lack of game-time is evidence of that. At a huge £25million, Wenger must scour the transfer market for alternatives that could prove more of a long-term buy. However, Turan provides certain quality, and with Santi Cazorla’s contract also expiring in the summer, experience in the playmaker role could be just what the north London giants need to mount a title challenge ahead of the 2017-18 campaign.

In other Arsenal transfer news, this is how former Miss Turkey could be the key to Ozil’s departure.