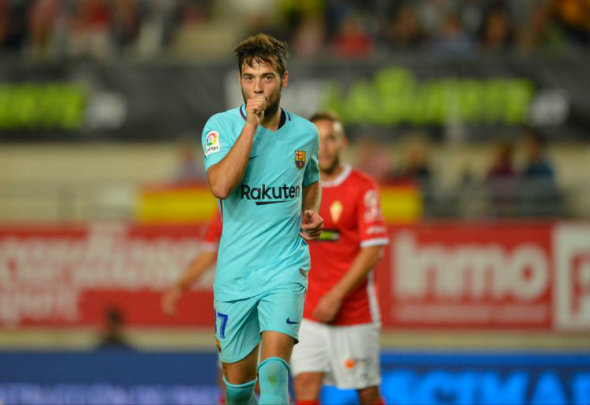 Arsenal are showing concrete interest in Barcelona winger Jose Arnaiz and are prepared to meet his £18million release clause in January, according to a report.

Spanish outlet Marca claim that the Gunners are keen on the 22-year-old after his performances for the Barcelona B team this year, for whom he is the top scorer with six goals in the Segunda Division.

It is said that Arsenal are ready to pay the winger’s release clause, currently standing at £18million, and their interest is so strong that an offer may be made in January.

However, Marca report that a winter deal may be impossible, as Arnaiz only joined the club from Real Valladolid in the summer.

The report also claims that the Gunners would be willing to fast-track the winger into first-team action, despite him having mostly played in the Segunda Division this season.

Arnaiz has impressed Barca boss Ernesto Valverde with his displays, and did make two appearances for the first-team in the Copa Del Rey, scoring two goals over two legs against Real Murcia.

It seems a bit strange that the Gunners would be showing such intense interest in a winger who has scored six goals in the Spanish second division. Arnaiz is obviously a talented player, but at 22 years old he is yet to show that he has what it takes to play at the top level yet. For the Gunners to go in with an £18million bid and throw him straight into first-team action would be reckless, and this report should be taken with a big pinch of salt.

In other Arsenal transfer news, the Gunners have reportedly abandoned their pursuit of this winger, who now wants to join Liverpool.