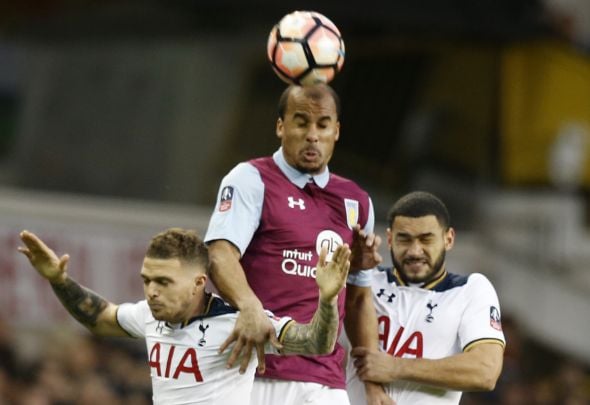 Aston Villa manager Steve Bruce is set to welcome Gabriel Agbonlahor back to training with the club this weekend.

The experienced 30-year-old has been sidelined for two months with a hamstring injury, but Bruce has confirmed that he is set to return to full training within the next 48 hours.

Bruce added that young striker Rushian Hepburn-Murphy was also on the verge of a return, and could be expected back in training at Bodymoor Heath at the start of next week.

Hepburn-Murphy has been out for three months with an ankle injury. January midfield addition Birkir Bjarnason, meanwhile, is still several weeks from a return.

The Aston Villa chief told the club’s official website: “We’re hoping Rushian is next week. We’re hoping Gabby is the end of this week.

“Birkir, I would expect, will be four or five weeks. We have a few coming back, which is great news.”

The pending return of the first-team duo will be a significant boost for Bruce and Aston Villa, who have seen their squad filtered down to the bare bones in recent weeks with a host of ongoing injury problems.

Aston Villa’s injury crisis had claimed as many as ten first-team scalps, including a large number of attacking players, but Bruce’s side managed to come through a tough run of fixtures relatively unscathed.

The likes of Scott Hogan, Gary Gardner, Alan Hutton and Henri Lansbury have all since returned from injury, as the club’s injury list whittles down to only a precious few.

But Bjarnason and Andre Green are two main senior players still sidelined for the Midlands outfit, as they prepare to face Norwich when their Championship campaign resumes on April 1.

In other Aston Villa news, Tony Xia has revealed what he is expecting from the club next season.