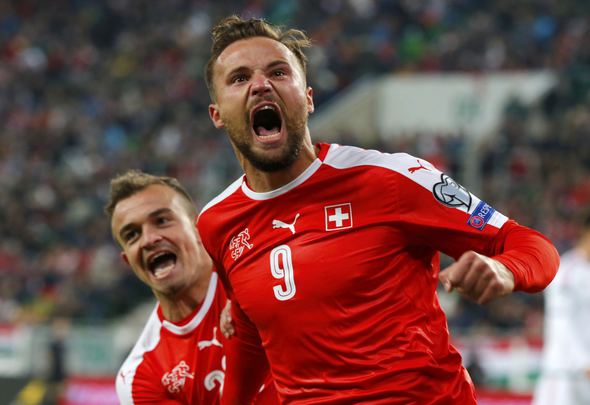 Aston Villa are keeping tabs on Frankfurt striker Haris Seferovic, according to a report.

The Daily Mail reports that Villa could swoop for the Bundesliga star when his contract expires at the end of the season.

However Frankfurt have an option to extend his deal by a further year if they wish.

A number of top clubs have been sniffing around Jonathan Kodjia after an impressive debut season at Villa Park which has seen him score 18 league goals.

Seferovic has not had the best season in Germany though, scoring just three goals in 21 appearances in all competitions with his contract set to expire in the summer.

The 25-year-old, who was previously linked with bitter West Midlands rivals West Brom, has only started eight league games this campaign and hasn’t found the back of the net since November when he struck the winning goal against Borussia Dortmund.

The 38-time Swiss international has also had spells at Real Sociedad, Fiorentina, Novara and Neuchatel Xamax.

If both Kodjia and McCormack were to leave Villa Park in the summer, Bruce would be left with Scott Hogan and injury-hit Libor Kozak as his only traditional strikers.

Aston Villa will definitely need a new striker in the summer, especially if Kodjia leaves, but there’s no way that Seferovic is the right man. He’s barely earning himself a starting spot for a Frankfurt side that are performing beyond expectations in the Bundesliga. It’s unlikely that he would come to Villa Park and replace the goals that Kodjia has providing this season. However if Villa manage to snap the Swiss international up on a free transfer then it might not be so bad. They would acquire a player with a vast amount of experience that could come in and be used as back-up to Hogan, who will no doubt be the number one choice up front.

In other Aston Villa news, Simon Jordan has hailed this senior figure for giving the fans what they deserve.