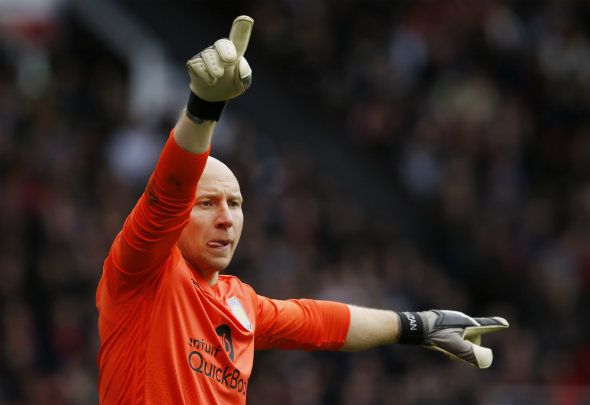 Brad Guzan is close to leaving Aston Villa after agreeing a two-year deal with Middlesbrough, according to a report.

The Guardian claim that Guzan is no longer wanted by Villa and is expected to join Boro on a free transfer even though his contract with the Midlands contract runs for another year.

It is said that the USA international is due to sign a contract this summer that will keep him at the Riverside until 2018.

The 31-year-old will face stiff competition as former Barcelona ace Victor Valdes and Dimi Konstantopoulos have already joined Aitor Karanka’s side in the current transfer window.

Villa have sanctioned the exit of Guzan after his form slipped alarmingly over the last 24 months and they conceded 76 goals last season in their relegation from the Premier League.

Continuous mistakes, poor distribution and a lack of confidence has led to the American’s downfall, despite being named the club’s player of the year for the 2012-13 season.

Villa owner Tony Xia informed supporters on his personal Twitter account that up to four players will depart the Championship club this week as manager Roberto Di Matteo trims his oversized squad.

The news of Guzan’s imminent exit will please supporters as they can now look to support their young shot-stopper Gollini in his first season with the club.

Gollini signed from Italian side Hellas Verona on a long-term contract earlier on in the summer as Di Matteo prepares to fight for instant promotion back to the Premier league.

In other Aston Villa transfer news, this Villa flop is set to earn a contract with a Premier League side.