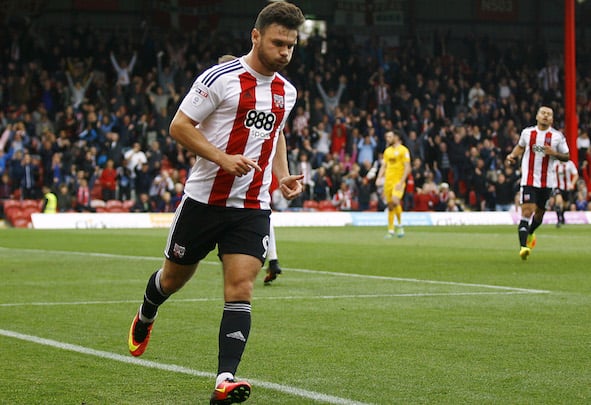 West Ham have ruled themselves out of the running to sign Aston Villa target Scott Hogan, according to a Sky journalist.

Sky Sports reporter Kaveh Solhekol has claimed on his personal Twitter account that Villa and Premier League duo Crystal Palace and West Brom have held talks about signing the player from Championship side Brentford.

Solvekhol said Hammers boss Slaven Bilic has had a “change of heart” and opted against signing the Brentford man.

This comes after  Bleacher Report’s transfer expert Dean Jones claimed on his personal Twitter account on Monday evening that Villa had a bid accepted for the player.

The 24-year-old has scored 14 goals for a mid-table second tier team this term as a number of clubs vie for his signature on deadline day.

It is said by the Sky Sports journalist that for the highly-sought-after player, Hogan’s preferred destination was a move to West Ham.

Guardian deputy editor Ed Aarons previously claimed on his personal Twitter account that Hogan is rated at £15million by his current club.

Told that #cpfc and Aston Villa are both interested in Scott Hogan. West Ham yet to return with new bid. Brentford holding out for £15m

Villa manager Steve Bruce has now been given a big boost in his pursuit to add another attacking player to his promotion-chasing team.

Bruce’s side take on Brentford on Tuesday night in a Championship clash.

West Ham’s decision to opt against signing Hogan after they were constantly trying to add the forward to their attacking line this month is strange.  They had numerous bids rejected and to pull out at the last second after all that hassle could only mean, they have another player lined up. This could be more damaging to Hogan, who prior to Brentford’s FA Cup loss to Chelsea at the weekend, had not featured for his side for a number of matches. The possible move to the Premier League had got to his head as he will regret his actions. But, this gives Villa a brilliant chance of landing the striker as his preferred destination no longer wants him.

In other Aston Villa transfer news, this midfielder delivers this message after making a late January switch.