West Ham are reportedly set to cut their losses on set-piece specialist Robert Snodgrass and Steve Bruce must look to beat his rivals and lure him to Aston Villa this summer.

Football London claim that the Hammers are willing to sell the 29-year-old for a cheaper price than the £10million they spent on the Scotland international back in January.

It is said that four clubs are currently chasing Snodgrass’ signature at the moment, including Premier League new boys Newcastle and Brighton as well as former sides Leeds and Norwich.

Football Insider believes Villa need to continue that summer spending spree by adding width to their squad and signing Snodgrass would boost their chances of securing Premier League promotion.

Here are three reasons why, including how the signing of the former Livingston attacker would prove to be a positive effect in Villa’s pursuit of promotion both on and off the pitch: 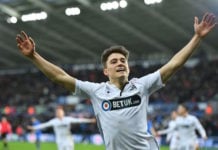