The striker, 20, has accepted the Ligue 1 club’s offer of a four-year contract and agreed personal terms.

An Everton source has told Football Insider that the club have also accepted an offer from Stade Reims for 6ft 4in Hornby. 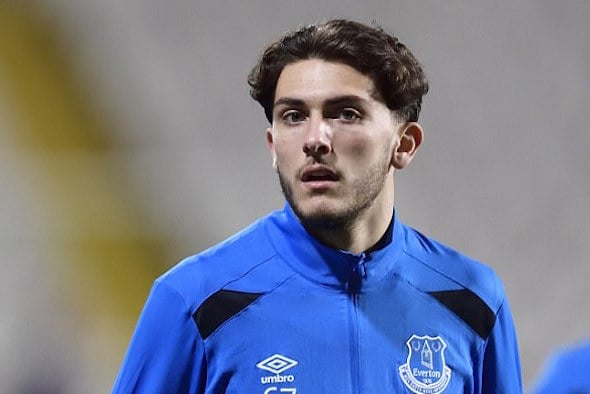 He is set to pack his bags and head out to join the club who finished sixth in the prematurely-terminated Ligue 1 campaign.

It will bring an end to his six-year spell at the Premier League big hitters.

Hornby has spent the season on loan at Belgian side KV Kortrijk, a move this site first revealed last August.

He has made only one appearance for Everton, that came in a Europa League clash with Apollon Limassol in 2017.

But he learned his trade for the club’s youth teams and had an impressive record for their Under-23s – eight goals in 33 matches at that level – before heading to Belgium at the start of this season.

The Scotland Under-21 international joined Everton from Northampton in 2014 for around £65,000.

He made enough of an impression at KV Kortrijk, scoring four goals and supplying one assist from 16 matches this season, to be on the verge of a plum move to France.

Everton are already looking at alternative strikers to bring to their production youth set-up.

As revealed by Football Insider, the Merseysiders are keeping close tabs on Kiwi wonderkid forward Matthew Garbett ahead of the summer window.

But they face competition for the services of the Sweden-based 18-year-old from Man City.

In other Everton news, Southampton’s stance on selling Pierre-Emile Hojbjerg to the Toffees is explained in detail.