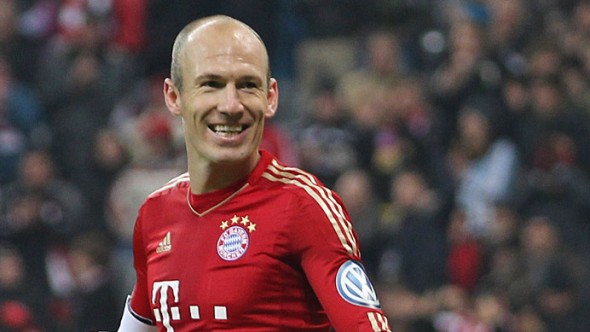 Bayern Munich ace Arjen Robben has admitted he was left “shattered” after the 2-1 win over Celtic in the Champions League on Tuesday night.

Goals from Kingsley Coman and Javi Martinez sealed the win for Jupp Heynckes’ side at Parkhead and secured their qualification for the knockout stage of the competition.

Callum McGregor briefly levelled the scores midway through the second-half but Bayern were able to get straight back in front through Martinez.

The Glasgow giants probably should have taken more from the game and provided a much tougher test than the previous clash between the sides a few weeks ago which the Germans comfortably won 3-0.

The clash with Brendan Rodgers’ side was the third game for the Bavarians in less than a week and Robben admitted the sapping schedule had taken it’s toll and left him exhausted.

“We’ve just had three games in six days and you’re shattered by the end of that,” Robben said, as quoted by Bayern’s official website.

With Bayern and Paris Saint-Germain both sealing a place in the next round, Celtic’s only hope now for European football after Christmas in finishing third in their Champions League group and parachuting into the Europa League.

The Hoops hold a three-point lead over Anderlecht and the two sides meet at Celtic Park in December in the final round of group stage fixtures.

In other Celtic transfer news, 17 clubs watched Tierney and Moussa Dembele for Celtic against Bayern Munich