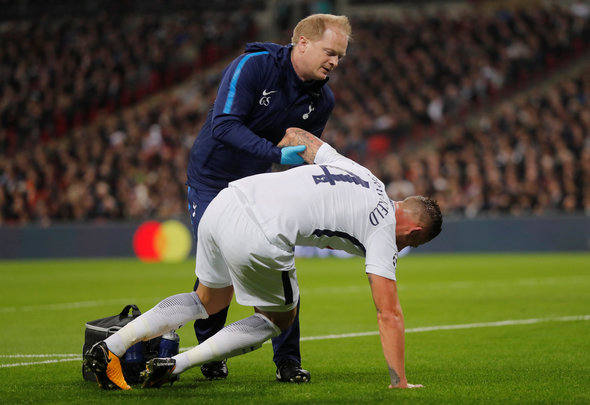 By Richard Parks
Toby Alderweireld has been left out of the Tottenham squad for their Champions League first leg tie against Juventus because he is “not fit enough”, according to a Belgian journalist.
Kristof Terreur, who covers the Belgium players in the Premier League for Belgian newspaper HLN, was among those who have reported that Alderweireld has been omitted from the Spurs party that leaves England for Turin on Monday for their biggest match of the season to date.
The Telegraph claim that the centre-back’s future at White Hart Lane is in doubt after Mauricio Pochettino opted to leave him behind in London while his contract row rumbles on in the background.
Tottenham fans who recall how Kyle Walker was left out of a series of marquee matches at the end of last season before being sold to Manchester City for £50million have widely expressed concern on social media that a similar situation is brewing.
However, Terruer insisted in a Twitter exchange with Spurs followers on Monday morning that Alderweireld has been left out of the squad for the last-16 clash against Juve because he is not yet fit enough for such a demanded fixture.

The defender made his comeback last Wednesday in the 2-0 FA Cup replay win against League Two minnows Newport County following three months on the sidelines with a hamstring injury.
He was then omitted from the Spurs squad for the 1-0 north London derby win over Arsenal on Saturday as Davinson Sanchez and Jan Vertonghen were paired in central defence, with Eric Dier pushed up into central midfield alongside Mousa Dembele.
Alderweireld has a deal that runs until 2020 but the Telegraph report that his contract features “a £25 million release clause that could be activated in the summer of 2019.”
In other Tottenham news, football fans on Twitter went into complete meltdown over one Spurs player for his performance in the 1-0 win over Arsenal.
Don’t miss out on breaking and exclusive Tottenham news by clicking here for our brilliant 24/7 updates on Facebook, Instagram and YouTube.