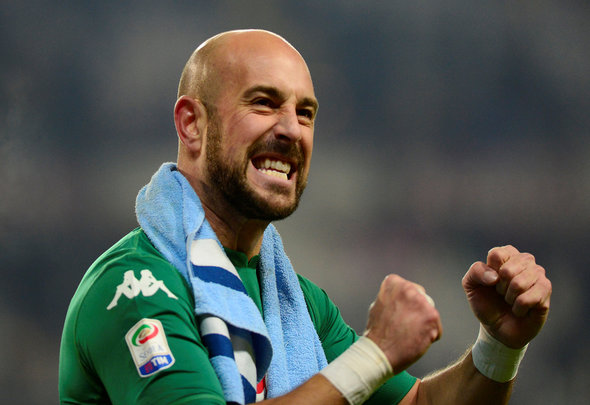 Newcastle United manager Rafa Benitez is eager to sign Napoli goalkeeper Pepe Reina this month and will attempt to force owner Mike Ashley into providing the funds for a big-money swoop, according to a report.
The Sun claims that Benitez is eager for a reunion with the 35-year-old goalkeeper he once worked with at Liverpool, but Napoli value the shot-stopper at over £10million.
It is understood that the Magpies have £10million to sign a new goalkeeper this month, so may have to enter some tough negotiations with Napoli in order to lower their valuation of Reina.
Newcastle are also said to have £100,000-a-week in wages to be able to offer a new striker, but Benitez wants to offer more than that in order to lure Reina back to the Premier League, where he proved himself as one of the best shot-stoppers in England during his time at Liverpool.
The Sun adds that the Magpies were looking to sign Spain World Cup winner during the summer transfer window, but were frustrated when Ashley would not cough up the funding.
It is said that Ashley is aware that Benitez might quit St James’ Park if he does not get his targets this month, so the Spanish manager is willing to push the boat out in trying to sign Reina.
Football Insider verdict
It’s pretty clear that Benitez wants a new goalkeeper for his Newcastle side. But that should not be the manager’s primary concern at the moment. Karl Darlow and Rob Elliot are not terrible options and there are other areas of his squad that are in need of reinforcement first. The Magpies definitely need a striker and possibly a left-back. Teams get relegated from the Premier League for not having someone who can get at least 12 goals a season, and currently there’s no one capable of getting that at St James’. Joselu may have scored on Saturday, but he appears to just be getting goals for the Toon because he is the one who is in that position.
In other Newcastle United news, the Magpies are favourites to seal a swoop for this £65,000-a-week proven Premier League forward this month.
We’ve launched a << BREAKING NEWS FEED>> exclusively for your club. ‘Like Us’ on Facebook by clicking here if you want 24/7 updates on all Newcastle United breaking news.