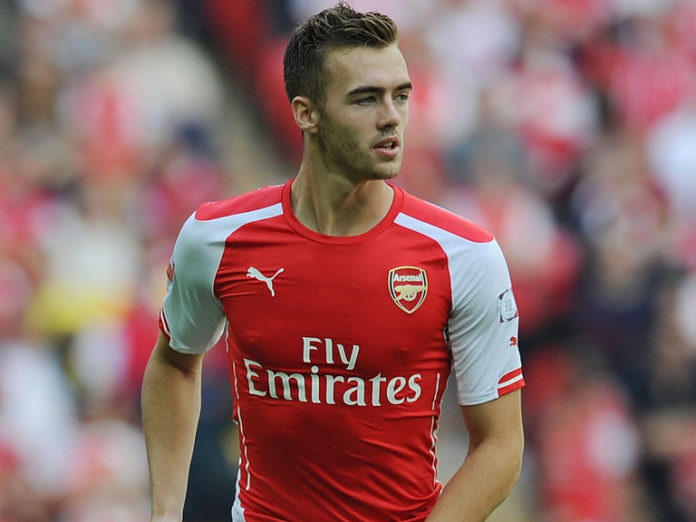 Arsenal completed a stunning 5-1 victory over AC Milan in the Europa League on Thursday night and booked their place in the quarter-finals of the competition.

They’ll find out who they play on Friday but in the meantime fans are delighted with the performance of defender Calum Chambers.

Chambers, who has been floating around the fringes of the Arsenal first team, got his chance after an injury to centre-back Laurent Koscielny after just 11 minutes of the game.

And the defender, who has faced a lot of criticism from Arsenal fans, put in a performance that had them purring at the Emirates.

One fan went as far as to say it was his best performance in an Arsenal shirt.

Another said he had put in a brilliant performance and that it was good to see him getting a run in the side.

Here are the best reactions from Arsenal fans, who are happy that they’ve finally got something to cheer:

Thought Chambers had a good game too, good to have Nacho back as well.

Chambers has been brilliant recently, good to see him getting a run and performing 👍🏻 #AFC #GoonerFamily

– Xhaka contorlled game excellently again, looks a far better base with Jack and Rambo next to him
– Danny playing himself into form (Never a pen)
– Better from Chambers composed performance, needs to replicate it
– Top performance, on to the quarters, just not Atletico #AFC

#AFC | Wilshere, Ramsey, Chambers, Xhaka and Welbeck all stood out to me tonight, really happy for Danny 👏

Chambers has done really well since coming on #AFC

In other Arsenal news, ‘The only one playing for the badge’ – Arsenal fans hail just one player in 3-0 loss v Man City