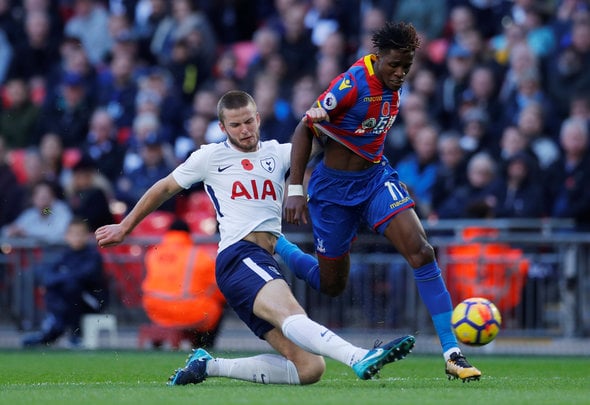 Tottenham are joint favourites with Arsenal to sign Crystal Palace forward Wilfried Zaha in January, according to the latest bookmakers’ odds.

BetVictor have Spurs and their bitter North London rivals priced at 4/1 to snap up Zaha, 24, next month after Roy Hodgson admitted that the Ivory Coast international could leave Selhurst Park in the future.

Chelsea (6/1) and West Ham (12/1) are also thought to be in the running to sign the former Manchester United wide-forward in January.

Zaha has been in top form recently for Palace, helping the club lift themselves off the bottom of the Premier League table.

The Sun has reported that Tottenham, Manchester City and Chelsea are all lining up bids for Zaha, who is known for his electric pace, in January.

That has led Hodgson to confess that the Ivory Coast international’s future may not lie at Selhurst Park.

“If the day comes when one of those rumours becomes the truth and there is a concrete situation, I’ll come to terms with it at that moment in time,” he said, as quoted by the Sun.

“If you ask if I want him to stay, then like the rest of Crystal Palace’s supporters, of course I do.”

Zaha has made 12 appearances in the Premier League this term, scoring four goals and supplying one assist.

In his first appearance back after a six-game absence with a knee injury, Zaha scored in Palace’s first win of the season in a 2-1 win against reigning champions Chelsea, ending what was the worst start in English top-flight history.

In other Tottenham news, Paul Merson has ripped into this ‘very average’ Spurs player.