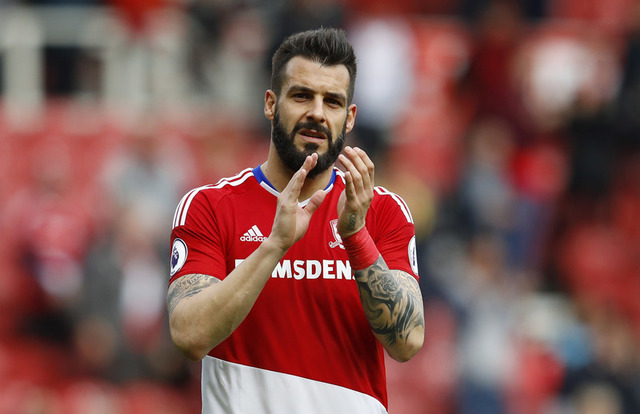 Wolverhampton Wanderers are the second favourites to sign Middlesborough striker Alvaro Negredo, according to the latest bookmakers’ odds.

Sky Bet have placed the Championship side at 7/1 on Saturday afternoon to land the 31-year-old during the summer transfer window. Wolves are currently a long way ahead of a host of top European sides who are also credited with an interest in signing the striker this summer with Fenerbahce, Galatasaray and Marseille all placed at 12/1.

Turkish champions Besiktas are currently leading the way at 11/4 to sign the Spanish forward.

The Midlands club have already demonstrated throughout this transfer window that they are capable of attracting big names with both Ruben Neves and Willy Boly completing deals from Porto to play at Molineux next season.

Negredo has demonstrated throughout his spell in England that he is capable of producing the goods.

The Spaniard enjoyed a superb debut season with Manchester City during the 2013-14 campaign, notching up a total of 23 goals and eight assists in all competitions.

The striker’s contribution helped the Manchester club secure a second Premier League title in three seasons and lift his first and only league title of his career.

Negredo finished last season as Middlesborough’s top goalscorer with 10 goals in all competitions but it was sufficient enough to save them from relegation to the Championship.

In other Wolves news, a reliable journalist has claimed that this U23 international is set for a medical at Molineux.