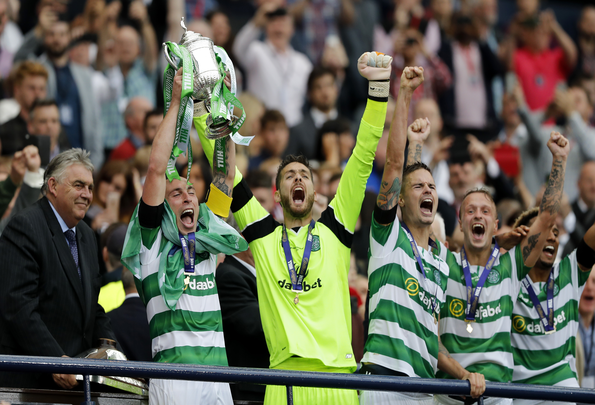 Celtic clinched their second consecutive domestic treble with a comfortable 2-0 win over Motherwell in the Scottish Cup Final.

The Hoops began the game on the front-foot, and took the lead in only the 11th minute, as Callum McGregor scored his 12th goal of the season with a superb half-volley from the edge of the penalty box.

The Bhoys continued to dominate the game, and a precise Olivier Ntcham shot doubled the Hoops’ advantage in the 25th minute.

Motherwell had their first real chance of the game early in the second-half, when Gordon turned a Curtis Main shot over the bar.

The Steelmen then hit the bar with a Gael Bigirimana free-kick after Dedryck Boyata was slightly fortunate to avoid a red card for a foul on Chris Cadden.

The Hoops were comfortable winners in the end though, and fully deserved their second successive domestic treble.

Craig Gordon – 7: Didn’t have a lot to do in the game but did what he was expected to, made a good save early in the second-half from Curtis Main but had very little to do otherwise.

Mikael Lustig – 6: A solid enough game for the right-back, who is now off to the World Cup with Sweden, a decent enough performance from the player who has had a good end to the season.

Dedryck Boyata – 5: Was decent enough until a poor challenge on Chris Cadden could have lead to a red card but he wasn’t the last man, needs to cut out his daft mistakes in his game.

Kristoffer Ajer – 7: A very solid performance from the teenager who has had an excellent first season with the Hoops and looks set to be a mainstay of the Hoops side for many years to come.

Kieran Tierney – 7: Was up and down the wing non-stop and the only thing which stopped him from having a great game was his final ball, which was lacking at times, still a good performance though.

Scott Brown – 7: Was his usual dominant self for most of the game, but seemed to tire in the second-half, can still be happy with his performance as he lead the Hoops to another domestic treble.

Tom Rogic – 7: The man with the new contract displayed his usual box of tricks and was close to scoring on a few occasions, didn’t grab the game by the scruff of the neck like he can but still played well.

Olivier Ntcham – 8: Sealed an impressive first season for the Hoops with an excellent goal which all but killed the game, his partnership with Scott Brown was once again key to the Bhoys’ success.

Callum McGregor – 9: Another big game, another big goal for the player who has the knack of scoring big goals in big games for the Hoops, one of his best performances of the season.

James Forrest – 6: Wasn’t at his best but can still be pleased with his season overall which was the best of his career, and he will be looking to push on and be even better.

Moussa Dembele – 8: Was very unlucky not to get on the scoresheet as he caused Motherwell all sorts of problems in what could be his last game for the Hoops, only time will tell.

Stuart Armstrong – 5: Made some good runs from midfield in what might be his last game for the Hoops, if that is the case he at least went out a winner.

Jozo Simunovic – n/a: Had very little to do in his cameo.

In other Celtic news, fans are happy with the team selected for the Cup Final