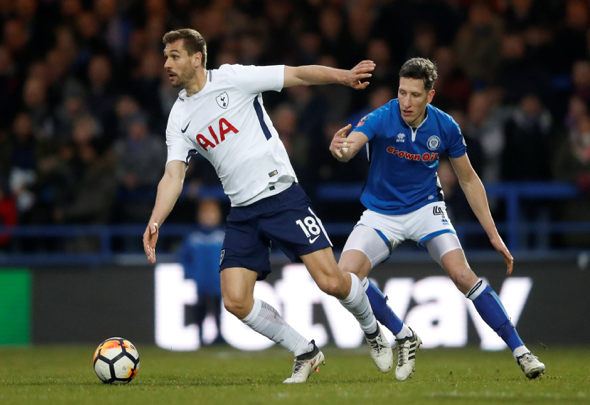 Tony Cascarino has said that Tottenham striker Fernando Llorente is not good enough to play under Mauricio Pochettino, and is the latest in a line of back-up strikers that constantly need “saving” by Harry Kane.
He also claims that the striker could seriously derail Tottenham’s season as Mauricio Pochettino keeps having to bring Kane on when he needs resting.
Cascarino says that Tottenham are “one serious injury” away from their season falling apart.
Llorente’s latest failure in a Tottenham shirt came against League One opposition Rochdale in the FA Cup on Sunday.
That makes four games against lower league opposition that Llorente has blanked in, meaning Pochettino has had to resort to bringing on Kane despite wanting to rest his main striker.
Llorente didn’t score in the 3-0 win against Wimbledon, or either of the two games against Newport either, and has only managed two in 26 appearances for Tottenham this season.
That’s not good enough for Cascarino who slammed the striker in his latest column in the Times.
“As he did in the previous round against Newport, Kane had to save his side from humiliation,” Cascarino said.
“Mauricio Pochettino had started Fernando Llorente in the hope of sparing Kane but he was needed off the bench to score what turned out to be a crucial second.
“Llorente looked very average and he follows a trend of back-up strikers who fail at Tottenham.
“The £11 million signing has just two goals this season and Clinton Njié (£12 million, 0 goals) and Vincent Janssen (£17 million, six goals) also struggled in previous seasons — it’s not good enough for a side who want to win trophies.
“The lack of talent has helped Kane flourish but it means Tottenham are one serious injury away from their season falling apart. Rochdale deserved a draw but Kane shouldn’t have been needed.”
In other Tottenham news, Graham Roberts slams Sky pundit after sensational World Cup claim about Tottenham ace
Don’t miss out on breaking and exclusive Tottenham news by clicking here for our brilliant 24/7 updates on Facebook, Instagram and YouTube.