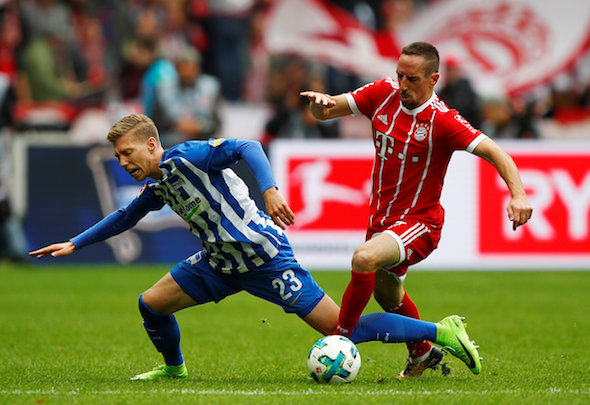 Celtic have been dealt with somewhat of a boost before their Champions League clash with Bayern Munich later this month with Franck Ribery ruled out of the clashes – and fans on Twitter are delighted with the major injury blow to the Frenchman.

The Bundesliga champions confirmed on their official English-speaking Twitter account on Monday that Ribery, 34, has tore a ligament in his left knee, ruling him out of action for his side’s upcoming clashes with the Hoops.

Breaking: @FranckRibery has suffered an LCL tear in his left knee.

The 81-times France international has long been a key player in the Bayern squad, lifting numerous league titles with them as well as the Champions League.

The winger has scored just one goal in nine appearances across all competitions this season, but he has still been ever-present in the first-team.

Celtic have been dealt a tough draw in the Champions League with Paris Saint-Germain and Anderlecht also in their group, meaning any result against Bayern later this month would be a massive boost to their chances of European football after Christmas following their 3-0 hammering of Anderlecht last week.

Fans on Twitter are understandably happy with the news that the Frenchman will be out of their upcoming meetings.

No ribery, no neuer, sacked manager…. is this our chance?👀👀 https://t.co/3vESpryM6h

Ribery is the least of our worries.

Oh dear, so sad, too bad

Ribery has been key to the Bayern squad since he signed for them in 2007.

He has since made 362 appearances across all competitions, scoring 112 goals in the process.

In other Celtic news, Chris Sutton has named three players from the Hoops and Rangers in his team of the week.