Celtic fans have been crying out to sign for him years and it seems that January might be their biggest chance to sign West Brom and Republic of Ireland winger James McClean.

The Telegraph has reported that the Baggies are planning to offload McClean, 28, in the January transfer window despite rejecting an £8million bid for him from Burnley in the summer.

It is understood that Albion are looking to flog McClean to Burnley in order to help them try and sign Ben Mee as a replacement for Jonny Evans, and that presents Brendan Rodgers to cure a hidden problem area in his side.

What would happen to Celtic if they were dealt with an injury to Kieran Tierney or Scott Sinclair? Aside from them there is very little strength in depth on the left-hand side of the pitch and Rodgers could really do with some extra bodies there.

Premier League flyer McClean has been played at left-back and on the left-wing at West Brom and could easily provide a massive attacking threat in domestic competitions should he play in either of those roles.

Aside from the fact that Celtic need someone of his position, the Parkhead fans have made it clear time and time again that they want the club to go out and sign the former Sunderland ace.

McClean is a supporter of the Hoops and fans love it when he takes to Twitter to take swipes at their bitter Glasgow rivals Rangers.

The move would make perfect sense and could be one that goes down in history on the Parkhead terraces.

McClean is Celtic through and though and would be a real asset to their side.

In other Celtic news, Alan Brazil has revealed what has made him feel sick about Rangers. 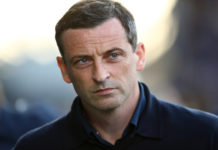