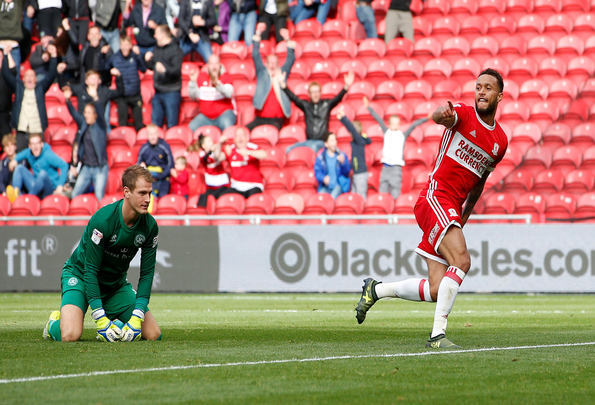 Celtic are in the hunt to sign Chelsea midfielder Lewis Baker, according to a report.
The Daily Mail are claiming that the Hoops “like” the 22-year-old, who is currently on-loan at Championship side Middlesbrough.
It is understood that Premier League giants Chelsea could terminate Baker’s loan deal at Boro before the January window opens and it seems that Celtic are keeping close tabs on his situation.
The goalscoring midfielder has featured 12 times for the Riverside club so far this season, scoring two goals but hasn’t played a game since the end of September, which is why Chelsea may well be considering moving him on.
Baker has spent previous seasons on-loan at Dutch side Vitesse Arnhem, where he netted 20 goals in 73 appearances over two seasons.
Football Insider verdict
The link to the player seems to be slightly tenuous, as the Daily Mail is only claiming that the Hoops ‘like’ the player, which is no guarantee that anything will come of it. However, if we look at Baker as a player then it is easy to see why Brendan Rodgers could be interested. A goalscoring midfielder is something that Celtic have lacked this season, as both Stuart Armstrong and Callum McGregor have found it difficult to recapture their form of last season, and Baker, who scored 15 goals in the Netherlands last season does seem to have a decent pedigree. If Chelsea are wanting the player to get some first-team opportunities then a spell in Glasgow, where every game has to be won, could do the player good and could do the Hoops good as they get ready to begin a busy second-half of the season.
In other Celtic news, Scott Sinclair has revealed that he is his own biggest critic
We’ve launched a << BREAKING NEWS FEED>> exclusively for your club. ‘Like Us’ on Facebook by clicking here if you want 24/7 updates on all Celtic breaking news.