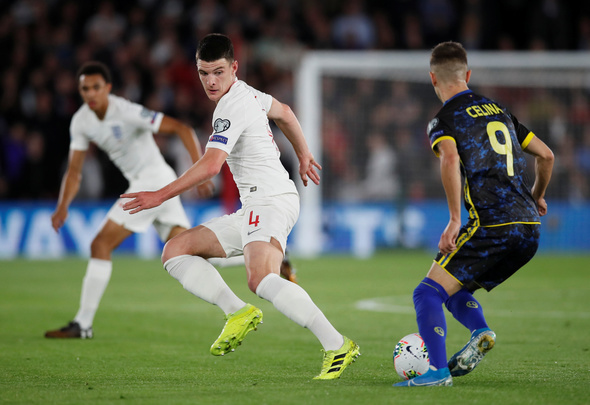 Darren Bent has accused West Ham star Declan Rice of taking his foot off the pedal in England’s 5-3 victory over Kosovo on Tuesday evening.

The former Aston Villa and England striker, speaking exclusively to Football Insider, says that the 20-year-old was guilty of being complacent in the second half in Southampton, allowing the visitors to net two second-half goals after going into half-time 5-1 down to the Three Lions.

Having started against Bulgaria, Rice was named in the starting XI by Gareth Southgate once again, lining up alongside Jordan Henderson and Ross Barkley in the middle of the park.

However, Bent was less than impressed with what he saw from the Hammers ace during the second 45 minutes, insisting that such lax performances would be punished severely by a better international side.

Speaking to Football Insider, Bent said: “For someone like Declan Rice, he’s playing in a position where he’s finding himself with not too much to do. When a team is battering another team, you’re getting on the ball, passing it sideways, passing it forwards – it comes easy.

“When your team’s so dominant on top of another, we’re talking 5-1 at half-time, it’s hard to keep those standards as high as you can. I think Rice got complacent, to be a top national team and compete with the likes of France, Belgium – for the 90 minutes you’ve got to keep your concentration.

“The three goals will anger him (Southgate) like crazy because they were all of England’s own undoing.”

Rice has been an ever-present for West Ham this season, featuring in every single minute of their opening four Premier League matches, while he was rested on the bench for the League Cup victory over Newport County.

He has made five appearances for England since his controversial switch from the Republic of Ireland national team last year, having played in three non-competitive games under Martin O’Neill.

In other West Ham news, Bent has told Football Insider he has been bitterly disappointed by one “Ropey” senior star this season.