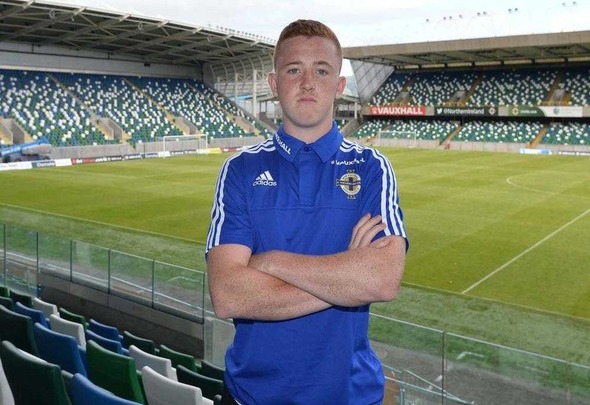 Everton have confirmed young forward Shayne Lavery has signed his first professional deal at the club after putting pen to paper on a new deal.

The Toffees confirmed on their official website on Friday morning that the 18-year-old had signed a one-year professional contract after impressing in the youth ranks.

The young teen joined the academy just two years a go in the summer of 2015 aged 16 on a scholarship deal.

He has not yet made a senior appearance for the Everton team, but he has previously made two appearances for the club’s Under-23s and he will now be aiming for a regular place in David Unsworth’s side as he continues his progression.

The young Northern Irishman played in 10 matches for the Under-18s in the most recent campaign and he returned one goals and three assists.

Everton meanwhile have put a lot of focus on their young players this season and a number have made the step up to the first team under Ronald Koeman, including regular star Tom Davies.

They will now be looking to bring more players through to the first team and the club’s coaching staff will hope that Lavery can follow in Davies’ footsteps.

Lavery’s stats don’t read too well and the fact that this is just a professional contract doesn’t indicate whether Everton believe he is a potential star or not. It is likely that the Toffees have just signed the youngster up to make up the number’s in the youth ranks as the club are entitled to. It is now up to Lavery to show that he is ready to make the step up to the first team as there is still a lot oF work to be done for the youngster.