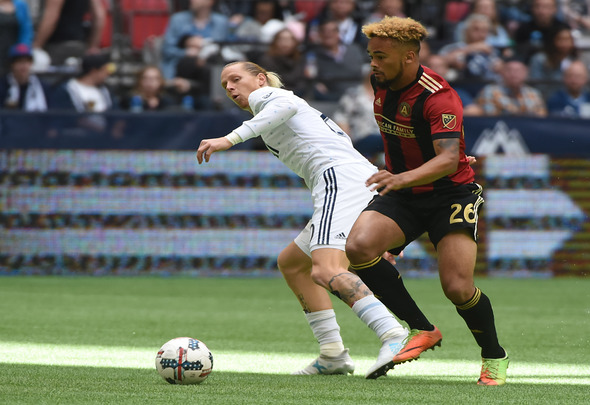 Tottenham have confirmed that Anton Walkes has agreed terms to a new contract with the club.

Spurs announced on their official Twitter account on Wednesday evening that Walkes, 20, has penned a new two-year deal in North London after proving himself to be a potential future asset while on loan with MLS side Atlanta.

✍ We are delighted to announce that @AntonWalkes has signed a new contract with the Club until 2019. pic.twitter.com/WzECrKmJ0y

Walkes has been in stunning form with Atlanta after a slow start to his loan spell which saw him struggle to get himself named in the matchday squad.

However since June, he has been a key part of the MLS club’s side, playing the majority of his football at right-back while also pressing forward on to the wing at times.

The traditional centre-back is an exciting product of the Tottenham academy and has already earned one senior appearance with the club prior to his loan switch across the Atlantic.

He has made 18 appearances in the 2017 MLS season for Atlanta, scoring two goals in the process in wins against San Jose Earthquakes and New England Revolution.

Mauricio Pochettino spent a lot of money on improving his defence in the summer and Walkes could only watch on as it appeared that his chances of senior football at his parent club fell further away from him. Juan Foyth and Davinson Sanchez will have moved above him in the pecking order once the temporary Atlanta ace returns to Spurs after his loan spell, leaving big questions over what Pochettino will do with him. This new deal may simply be to increase his selling price but Tottenham must do more to ensure that they are giving academy products more of a chance in the first team. They may miss the next Harry Kane if they keep looking abroad.

In other Tottenham news, Arsenal icon Paul Merson has made a massive claim about this Spurs player.