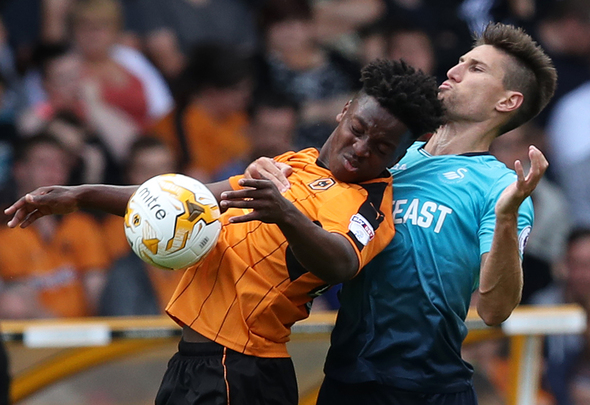 Wolves striker Niall Ennis has agreed terms to a new two-and-a-half year deal, it has been confirmed.

The Championship leaders announced on their official website and official Twitter account on Friday that the paperwork has been finalised for Ennis, 18, to commit himself to Molineux until the end of the 2019/20 season with the option of an extra year.

We are delighted to announce that @Niall_ennis46 has signed a new deal with Wolves which will keep him at the club until 2020 with the option of a further year. #WWFC

Ennis was sent out on loan to Shrewsbury in the summer but just weeks into his time at the League One club, the striker was dealt with a cruel injury blow in training that ruled him out for six months and he has been in rehabilitation with Wolves ever since.

The striker remains on loan with Salop but the Shropshire side will assess his fitness levels in January before deciding whether or not to cancel his deal.

“We saw Niall the other day,” said Shrews boss Paul Hurst in October, as quoted by the Shropshire Star. “His recovery is going quite well but again he’s still some time away.

“Obviously there’s January where there is a break, if it can be agreed, depending on the situation.

“That’s something we’ll have to look at at that point because if he’s not going to be fit for another two or three months then it’s probably not great for us in terms of working with numbers and we’ll look to do something else.”

The England Under-18 international has never made a senior appearance for Wolves and only ever played twice for Shrewsbury before his terrible injury blow.

It’s a great message from Wolves to hand Ennis a new deal while he is in the middle of recuperating from a serious injury. Ennis has a lot of hard work ahead of him to get back up to fitness and get back playing and he will no doubt be hoping that he can impress the Shrews enough to merit staying there until the summer. The England youth international has first-team potential but with all the big-money being splashed around at Molineux it would be hard for the forward to get a look in. Ennis may just be seen as a good investment for the future.

In other Wolves news, the club is plotting a shock raid of one of their Midlands rivals for this target man.