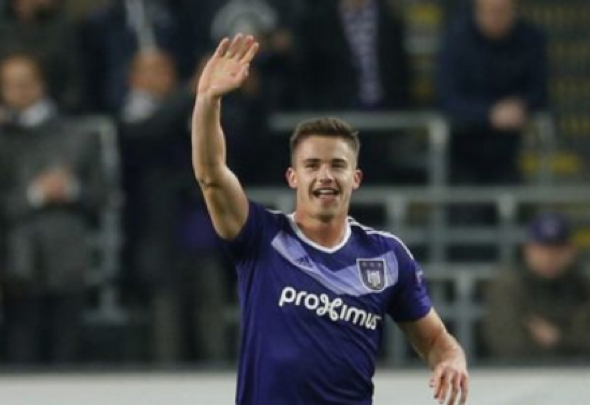 Leander Dendoncker is set to make an imminent decision on his Anderlecht future after reportedly interesting Everton.

The Sun claimed last month that the 22-year-old midfielder was a £15million target for the Toffees, with Manchester United and Chelsea also said to be keen.

Sky Sports Transfer Centre quoted Dendoncker (Saturday, 1.20pm) as saying that he was to make an announcement over where his future lies after talks with his agent.

“I don’t know anything yet. I have spoken with my manager (agent) now we will see. I am awaiting his opinion. I am focused on the national team and after we will see,” he said.

When quizzed about interest from Everton, Man United and Chelsea, Dendoncker revealed that “those are nice clubs. We will see.”

Dendoncker is not the only Anderlecht midfielder to have attracted interest this summer, with Youri Tielemans leaving the Belgian giants to join Monaco last month.

Making a huge 52 appearances in all competitions, Dendoncker scored six goals from holding midfield and helped his side keep 21 clean sheets and hold aloft the Belgian title.

The two-time Belgium international has a contract with Anderlecht until the summer of 2021 and any interested parties will have to do some convincing in order to tempt Anderlecht to sell.

Dendoncker is quickly developing a reputation as one of the best young stars in European football in his position at the moment, after starring alongside Tielemans. He would be a top signing for any Premier League side, with his best years ahead of him and his quality only likely to get better when facing quality opposition. However, the Toffees already have an abundance of central midfielders, following the January signing of Morgan Schneiderlin and the breakthrough of Tom Davies. With Gareth Barry, Muhamed Besic, James McCarthy and Idrissa Gueye also on the books, Ronald Koeman must axe one or even two of his first-team midfielders before bringing Dendoncker to Goodison Park.

In other Everton transfer news, the Toffees are eyeing this £17.5million-rated goalkeeper.