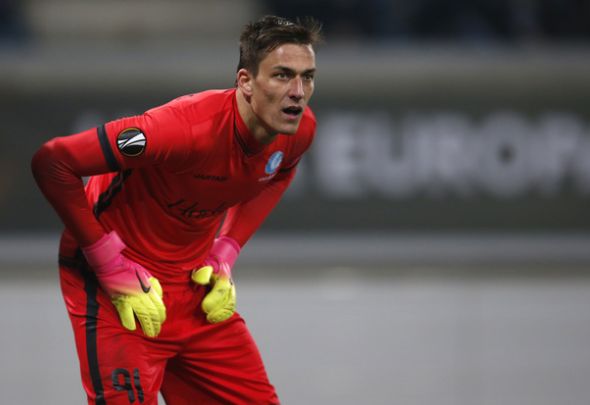 Everton are readying a £17.5million offer for Gent goalkeeper Lovre Kalinic, according to a report.

Croatia outlet Sportske Novotski believe the Toffees have made the 27-year-old stopper the Merseyside outfit’s first-choice transfer target this summer.

It is believed Gent are desperate to keep their goalkeeper as they see the eight-time Croatia international as “one of the pillars” of Hein Vanhaezebrouck’s side.

Everton are said to be after a goalkeeper after the Mirror claimed the Toffees have made a £10million bid for Jordan Pickford, while the Daily Mail say Joe Hart is wanted.

Former Hajduk Split goalkeeper Kalinic joined Gent in January 2017 but the Belgian side could be set for a huge profit, just six months after he signed a four-and-a-half-year deal with Gent.

Despite only play for half of the 2016-17 campaign, Kalinic was given the title of Best Belgian Goalkeeper of the year after keeping nine clean sheets in just 23 league and cup outings.

Kalinic was also part of the Gent side that knocked Tottenham out of the Europa League in the Round of 32 in January, keeping a clean sheet in the first leg during a 1-0 win.

Everton currently have Joel Robles and Maarten Stekelenburg in between the sticks at Goodison Park, but Kalinic is believed to be an improvement on both according to the report.

Spaniard Robles has shown on multiple occasions this season that he is capable of a blunder and has a tendency to pull off a number of fantastic saves, before allowing a soft effort to creep past him. He must be replaced next season if manager Ronald Koeman wants to push his side towards the top six of the Premier League next season, and Kalinic could hold the key to securing a place among the best in England’s top flight. Known for his shot-stopping ability, Kalinic is a top goalkeeper and would more than improve the Toffees’ current options. Even though £17.5million is a lot of money, Everton can afford it due to the riches of cash-rich owner Farhad Moshiri and paying over the odds now could see the Toffees avoid any further competition for Kalinic down the line.

In other Everton transfer news, Toffees and Arsenal scouts are eyeing this Charlton wonderkid.