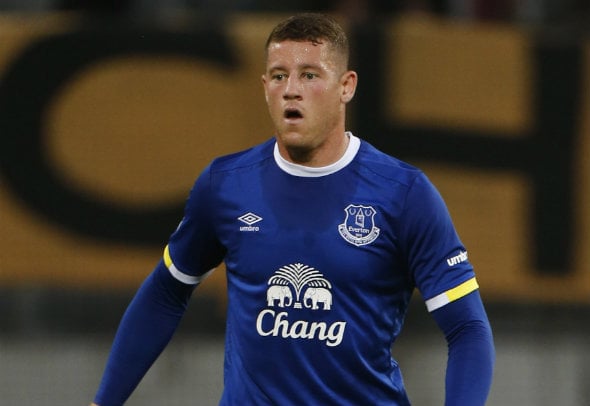 Ross Barkley scored just his second goal of the season against West Ham and fans were pleased with the England international’s performance on Twitter.

The 22-year-old has suffered a lot of criticism from fans and his manager Ronald Koeman this season after a number of disappointing performances for Everton.

It was his first goal since the opening weekend of the Premier League season when he netted during the 1-1 draw against Tottenham.

Barkley has made nine appearances in the league this season but has been urged to up his game by Koeman, who has threatened to drop the youngster due to recent poor performances.

However, the England international, who came off after 87 minutes, silenced his critics with an assured display against the Hammers, causing them problems in midfield.

His goal came after 75 minutes and doubled Everton’s lead after Romelu Lukaku had scored his 50th Premier League goal early in the second-half.

Everton currently sit in sixth position in the Premier League and were happy to bounce back from a disappointing 2-1 defeat against Burnley last weekend.

After recent frustration, Everton fans reacted with relief as Barkley seemed to demonstrate some of his old form and they were pleased as he capped off a good performance with a goal.

Very happy to hear Barkley had a good game, I like the guy.

As much as he's deserved recent criticism, Ross Barkley has been brilliant today. Done everything we've been asking of him for months

His goal today aside, Barkley has created more chances for his team than any other #efc player this season. Doubters silenced?

Needed that barkley! Never been a huge fan of him people either rate him far too much or blame him for everything. Needs to score 12 a year

Barkley is a prime example of how we dont push on and help young English footballers. All people do is moan about him

I haven't said this for such a long time. Ross Barkley MOTM

In other Everton news, fans reacted on Twitter prior to kick-off as Funes Mori was included in the Toffees’ starting line-up.