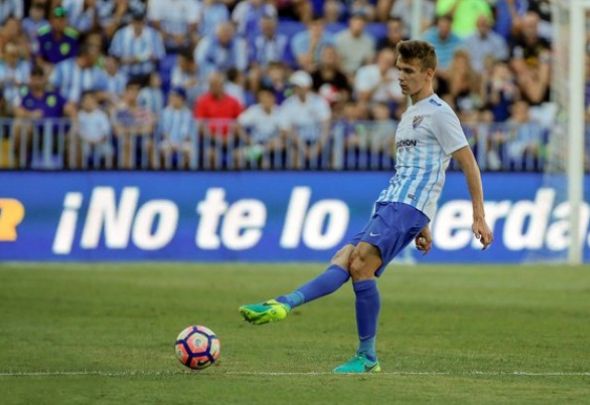 Everton are plotting a bid for Real Madrid defender Diego Llorente, according to a report.

Spanish news outlet Marca claims that the Toffees are set to make an offer worth £12.2million for the 23-year-old, who has spent the last season on loan at Malaga.

However it is understood that Everton face stiff competition from La Liga outfit Real Sociedad, who are hoping to land Llorente in a deal worth £6.9million.

The centre-back, who can also play as a holding midfielder, made 27 appearances in all competitions this season while with Malaga, who finished 11th place in La Liga.

He also scored two goals, with one coming in a surprise 4-2 victory over Sevilla, but was also sent off in a goalless draw with Barcelona.

Llorente earned his one and only Spain cap last May in a 3-1 friendly victory over Bosnia and Herzegovina, despite only making three senior appearances for Real Madrid.

The 23-year-old has been on the books at the Bernabeu since 2002 and spent last season on loan with Rayo Vallecano.

He is contracted to Madrid until 2020.

Ronald Koeman definitely needs to make some additions to his defence over the summer as some of his senior centre-backs simply haven’t lived up to expectations this season. Ashley Williams has done okay since moving from Swansea while Phil Jagielka is not getting any younger. Ramirio Funes Mori has been constantly criticised by fans for his performances, despite Everton performing well in the Premier League. Llorente would bring the average age of the back line down quite a bit and snapping up a player with Real Madrid pedigree can never really go wrong. He could be a star for years to come at Goodison Park.

In other Everton news, this Toffees first-team player has reached an agreement to move to another club.