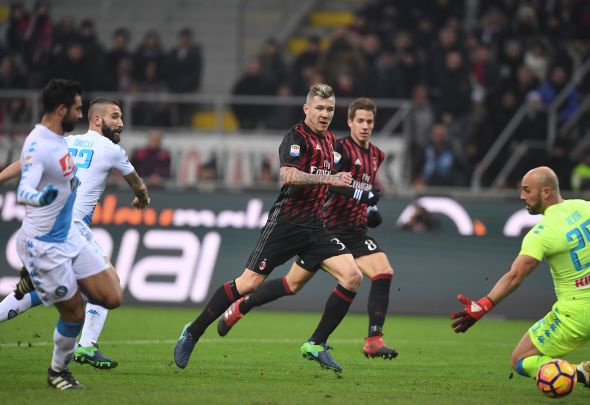 Everton are eyeing a move for AC Milan midfielder Juraj Kucka in order to bolster Ronald Koeman’s midfield options this summer, according to a report.

Italian outlet TuttoMercatoWeb claim the 54-time Slovakia international is on Koeman’s radar ahead of the transfer window, with Milan’s Serie A rivals Torino also said to be keen.

It appears that the Toffees are targeting Italy’s top tier, with The Sun also claiming Napoli defender Kalidou Koulibaly is a £60million target for the Merseyside outfit.

Kucka, 30, is an experienced central midfielder who is known for his combative and hard-working displays in front of Vincenzo Montella’s defence.

However, his temperament can sometimes boil over – Kucka has picked up 10 yellow cards and three red cards for Milan this season.

Milan’s number 33 has spent most of his career in Serie A, moving to the San Siro from Genoa in the summer of 2015 after making 127 appearances with his former side.

This season, Kucka has made 31 appearances in all competitions, scoring four goals against the likes of Fiorentina, Napoli and Torino as well as laying on two assists.

Kucka could be tempted to add another string to his bow before it is too late by plying his trade in the Premier League with Everton, but has a contract with Milan for just over two years.

Although Kucka would add a steeliness and bite to Everton’s midfield next season, Koeman must bolster other areas of his side before bringing another central midfielder to Goodison Park. The Toffees need a goalkeeper, a central defender and back-up/replacement for Romelu Lukaku, and the Dutch manager would be well advised to add to his side in these areas before signing another central star. With the breakthrough of Tom Davies and the January signing of Morgan Schneiderlin, Everton have an abundance of players in the middle of the park along with Muhamed Besic, Gareth Barry, James McCarthy and Idrissa Gueye. Bringing Kucka to Merseyside must mean that Koeman offloads one, if not two of his midfield stars.

In other Everton transfer news, fans have urged their club on Twitter to sell this senior star.