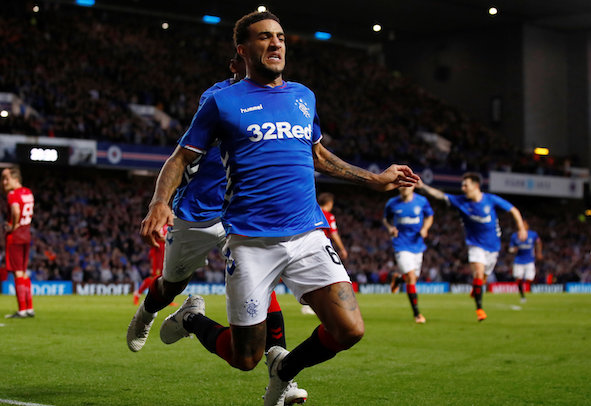 Alan Hutton has been left drooling over the improved performances of Rangers defender Conor Goldson despite seeing him struggle against Livingston on Wednesday night.

Speaking exclusively to Football Insider assistant editor Russell Edge, the former Rangers full-back and lifelong fan of the Light Blues says that the centre-back has really upped his game during his time at Ibrox, offering every quality you could want from someone at the heart of the defence.

The powerhouse signed for Rangers from Brighton during the summer of 2018, quickly establishing himself as a mainstay in Steven Gerrard’s starting XI.

Hutton says that he has been seriously impressed with the 26-year-old’s displays for Gerrard in recent weeks, although admits there is still room for improvement after Wednesday’s 1-0 win over Livingston.

“Chipped in with a few goals but also he’s big, powerful, commanding, he’s decent with the ball. He’s literally everything you want from a centre-half up there.”

Goldson has played in all but one of Rangers’ 16 games across all competitions this season, Gerrard resting the centre-back against East Fife in the League Cup.

He has a total of 70 appearances under his belt for the Gers, 28 more games than he played during his three years at Brighton.

In other Rangers news, Football Insider can reveal that the Gers have offered a £20,000-a-week contract to one of their first-team stars.