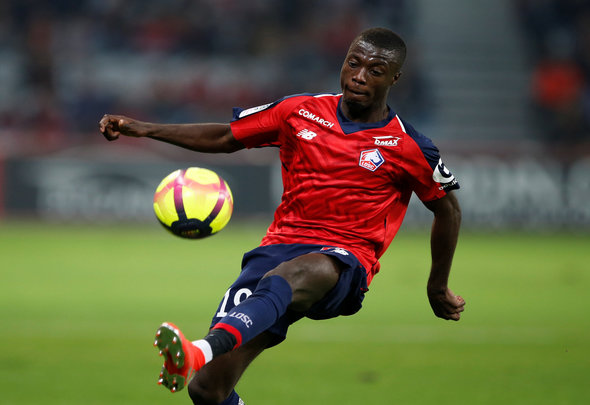 Arsenal are working to beat Manchester United to the signing of winger Nicolas Pepe despite the Lille winger having already agreed terms at Old Trafford, Football Insider understands.

The 24-year-old is looking to secure a move to the Premier League this summer after lighting up the French top flight with his performances, leading to a number of major clubs chasing his signature.

A source at Arsenal has told Football Insider that the Gunners believe they are still in the running for the Lille ace, despite developments at Manchester United, and are hoping to beat their top flight rivals to his capture.

As exclusively revealed by Football Insider, United have agreed terms of a five-year contract with the Ivory Coast international as the two clubs continue to work on agreeing a fee for his capture.

While Arsenal are continuing to work in an effort to strike a deal for Pepe, the player’s preferred destination is Old Trafford, leaving Unai Emery a battle to try and convince him of a move to the Emirates Stadium.

The French side are demanding a fee in the region of £70million to let him leave, having seen him fire the club to finish as runners up in Ligue 1 and secure Champions League football next season.

He contributed a total of 34 goals and assists during his side’s league campaign, cementing his place as one of the most exciting prospects not currently at a European giant.

In other Arsenal news, Danny Mills has blasted the club for not snapping up an “absolute bargain” from their top-flight rivals this summer.