Alan Hutton has been drooling over Hearts sensation Aaron Hickey and believes Celtic could sign him in a cut-price deal this summer.

The former Rangers and Scotland full-back, speaking exclusively to Football Insider assistant editor Russell Edge, admits he has been blown away by the 17-year-old since breaking into the senior side in Edinburgh.

90 Min report that the Hoops are set to trump the likes of Arsenal, Everton and Leeds to the teenager’s signing this summer, having already had the starlet on their books between 2017 and 2018. 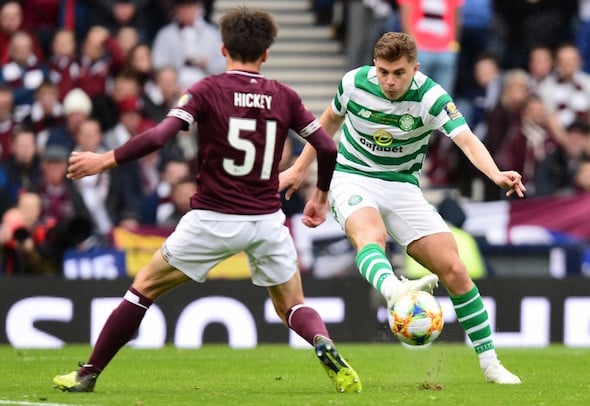 Despite his age, he has established himself as a mainstay at Hearts, with 30 first-team appearances under his belt this season.

Hutton admits he has been dazzled by Hickey’s rapid rise into a first-team talent and believes joining Celtic will only help take him to the next level.

Hutton told Football Insider: “He’s so young, so, so young and for what he’s achieved so far I think is brilliant. To have played in as many games at his age, it just shows you how talented he really is.

“He’s got even better, he’s become a better player and he’s versatile as well, I think a lot of clubs look at that at the moment. He plays on the left but he can also play on the right – he ticks a lot of boxes.

“He’s definitely a player that can be moulded and made even better playing in a stronger team. I think there a lot of the positives for Celtic – obviously not for Hearts, it looks like they’re going to go down. I think maybe Celtic would get him a little bit cheaper so it’s great for them.

“Looking to the future he’s a player who could really play for years and become a real star in that Celtic team so it doesn’t surprise me they’re interested, there seems to be a lot of other clubs interested as well but he seems to favour Celtic.

“He’s been there, it’s not quite worked out, he’s had that drive, that force to go away and prove people wrong and it’s worked for him. This is a lesson for a lot of young kids.”

In other Celtic news, it can be REVEALED the Hoops have slapped a £20million asking price on a senior star (not Edouard) and are willing to sell this summer.