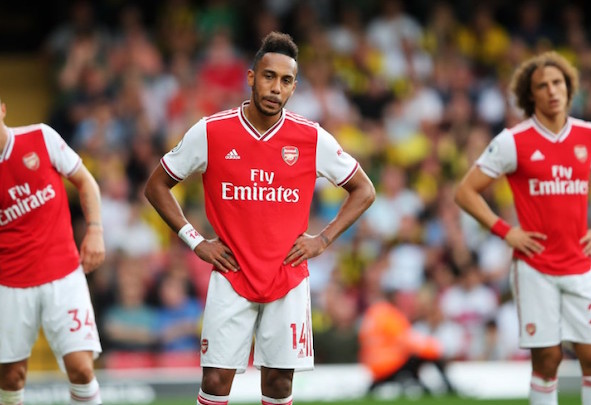 Danny Mills has suggested that Arsenal striker Pierre-Emerick Aubameyang was left fuming with his teammates after seeing them concede twice in the draw versus Watford.

Speaking exclusively to Football Insider assistant editor Russell Edge, the former England full-back says that the Gabonese attacker will have been questioning the performance of those behind him in the dressing room after scoring twice to give the Gunners a 2-0 lead at half-time.

The Hornets managed to overcome the deficit to score two second-half goals and ensure that Unai Emery’s men left with just one point rather than three.

Mills says that the striker will have been tearing his hair out behind-closed-doors at full time and telling the rest of the Arsenal side that he carried out his duties as expected.

Asked if he thought the Gunners forward would be having words with his teammates, Mills told Football Insider: “Yeah, it’s one of those games where, as an attacker, you come in at the end of the game, turn around and say: ‘Look, I’ve done my job lads. I’ve got two goals, we’re 2-0 up, what are you doing?’

“It’s so difficult to explain. You get caught out the first time, that’s okay, but you have to learn lessons. The first rule of football, do not follow a mistake with the same mistake. That’s what you’re taught as a kid.

“That’s what Arsenal seem to have forgotten.”

Aubameyang has been in exceptional goal-scoring form this season, netting five goals in as many games, his only blank coming in the 3-1 defeat to Liverpool.

He scored 22 times in the top flight last season, seeing him share the golden boot with Anfield stars Mohamed Salah and Sadio Mane.

In other Arsenal news, Darren Bent has suggested to Football Insider that one Premier League star has his heart set on a move to the Emirates Stadium.