Alan Hutton has admitted he was alarmed by the lack of attacking options on the Aston Villa bench against Southampton.

Speaking exclusively to Football Insider assistant editor Russell Edge, the former Villa and Scotland defender insisted that while the starting XI is “very strong”, there were not enough players the manager could call on from the bench to change the game.

Trezeguet, who replaced the injured Bertrand Traore early on in the 4-3 defeat, and Keinan Davis were the only recognised attackers among the substitutes.

Goalkeeper Jed Steer, defenders Ahmed Elmohamady and Bjorn Engels and midfielders Marvelous Nakamba and Conor Hourihane made up the rest of the bench.

Hutton has admitted he thinks the Villans were lacking in options on Sunday and suggested that Smith will be looking at adding to his squad.

Hutton told Football Insider: “I did look at the bench when they were 3-0 down and I was thinking: ‘There’s not many options there, other than Keinan Davis there, that would come on and change a game.’

“I think the starting XI is very strong but maybe that’s the side that needs strengthening. It’s Traore or Trezeguet, that’s your main substitution to change it – or Keinan Davis.

“After that, you’re kind of light, it’s very defensive so it’s maybe an area he’s going to have to look to sort out.” 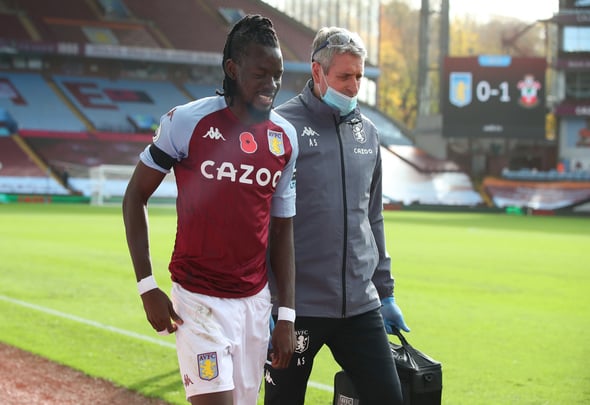 Traore lasted just under 30 minutes in what was his first Premier League start for the Villans, having featured as a substitute in the club’s last four top-flight games.

He did start both of Villa’s League Cup games and netted on his debut against Bristol City.

In other Aston Villa news, Dean Smith has been told to open contract talks with “fantastic” 25-year-old.