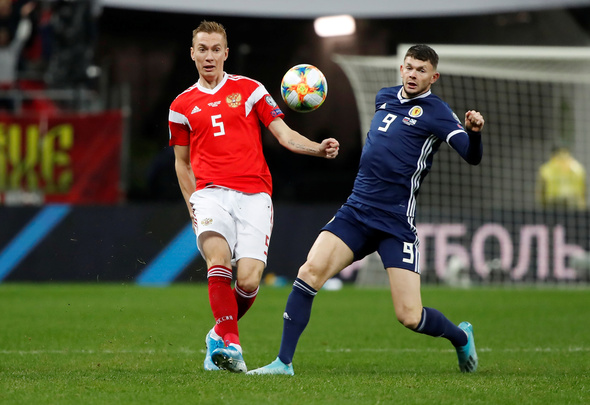 Jackie McNamara says that he hopes Scotland manager Steve Clarke has other options at his disposal after watching West Brom attacker Oliver Burke put in a “disappointing” display for Scotland.

Speaking exclusively to Football Insider assistant editor Russell Edge, the former Celtic and Scotland international says that the 22-year-old has plenty of pace to burn but that he and his teammates failed to create any real goal-scoring opportunities.

Burke, who joined the Baggies back in 2017, has nine caps under his belt for his country, but only lasted until half-time in Thursday’s international clash with Russia after picking up what appeared to be a back injury.

Having watched Burke also struggle on loan at Celtic last season, McNamara says that managers do not seem to know where his best position is, suggesting he should be axed for Johnny Russell on the international stage.

McNamara told Football Insider: “They didn’t have a massive amount of options but I think they just tried to keep playing along the lines of trying to catch them out on the break, put it into corners with his pace.

It didn’t prove to be any case at all, we didn’t create opportunities and he didn’t take his opportunity to go and create something which was obviously disappointing.

“You look at Johnny Russell, I thought he might have started the game as an out-and-out centre forward rather than playing different parts. He does well for his side Johnny, not the same pace as Burke but he’s not slow. I think he’ll be disappointed he didn’t get on.

“It’s hard to say what position the lad is, Brendan brought him in at Celtic as a second striker, sometimes he played as a striker, every manager’s different but you’re hoping he’s got other options there.”

Burke is currently on loan at Spanish outfit Deportivo Alaves where he has played primarily as a right-winger, producing one assist in his four La Liga appearances.

He only has 24 West Brom outings under his belt in his two years contracted with the Baggies, featuring in both the Premier League and the Championship.

In other West Brom news, Football Insider can reveal the club has set their sights on blowing Aston Villa away to sign a promising sensation.