Arsenal star Willian has been “embarrassing” since his high-profile move from Chelsea.

That is according to ex-Leeds United striker Noel Whelan, speaking exclusively to Football Insider about the Brazilian attacker prised from rivals Chelsea on a free transfer.

The capture did not go down well with sections of the Gunners’ vast fan base and that has continued during a mixed start in north London for Willian. 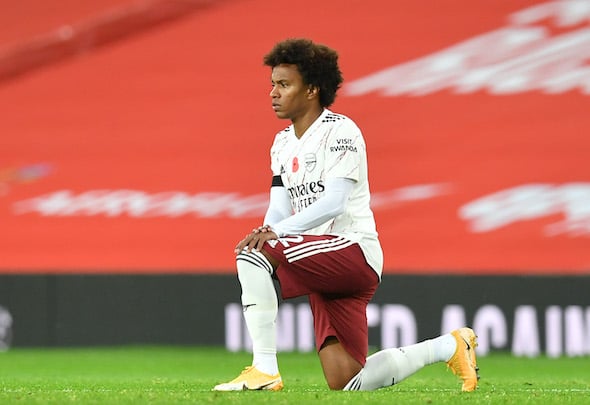 The 32-year-old has yet to score in 14 games for his new club and two of his three assists came in the opening-day Premier League win over Fulham.

Willian drew another blank in Sunday’s 2-0 Premier League defeat to Tottenham as he played the full 90 minutes of the clash that meant Arsenal ended the day 15th in the table.

Whelan told Football Insider: “Willian is not the same player he was at Chelsea. You watch him this season and think, ‘what happened to him’?

“He’s not doing enough. He’s not creating chances, not working his full-back, not assisting, scoring goals.

“He looks a shadow of his former self. Mikel Arteta has a lot of faith in him, keeps selecting him, but it’s not really justified.

“His contribution has been embarrassing at times.”

Willian had an outstanding record during his seven years at Chelsea and has also accumulated 69 Brazil caps.

The winger was a regular scorer and creator for the Blues last season, with his 47 matches yielding 11 goals and nine assists.