Tottenham rising star Jamie Bowden is set to be sidelined for two months in a devastating blow, Football Insider can reveal.

The midfielder, 19, has sustained a medial knee ligament injury in training at the club’s Hotspur Way headquarters.

It is a huge blow for Bowden, who is highly rated by the north London club’s coaching staff after an association dating back 13 years.

He is regarded as one of the outstanding young players at the club along with the likes of Troy Parrott, Oliver Skipp, Japhet Tanganga and TJ Eyoma.

Parrott, Skipp and Eyoma have been loaned out for the season to Swansea City, Norwich City and Lincoln City respectively.

Football Insider broke the news last autumn that Bowden was in advanced talks to sign a new deal, that was subsequently announced 24 hours later.

He penned a three-and-a-half year deal running until the summer of 2023 and is highly rated].

Born in Middlesex and of Irish citizenship, the defensive midfielder was brought up in Tottenham and joined the club’s academy at the age of six.

He has yet to make his senior Spurs bow but has represented England at age-group level and is also eligible to play for the Republic of Ireland. 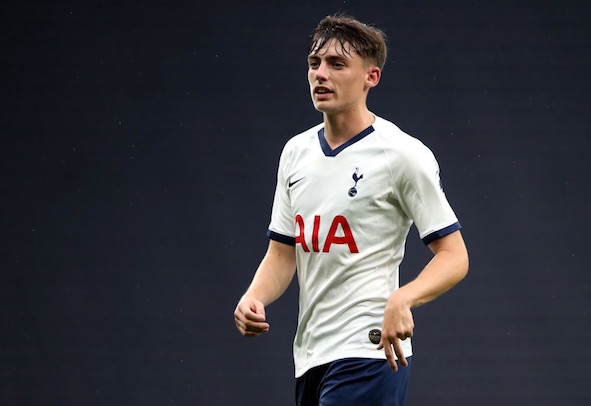 Bowden travelled with the senior squad for their epic Champions League quarter-final win over Manchester City in April of last year and was pictured in the team celebrations afterwards.

He also joined the first team for their pre-season tour of Asia last summer as ex-boss Mauricio Pochettino recognised his immense potential.