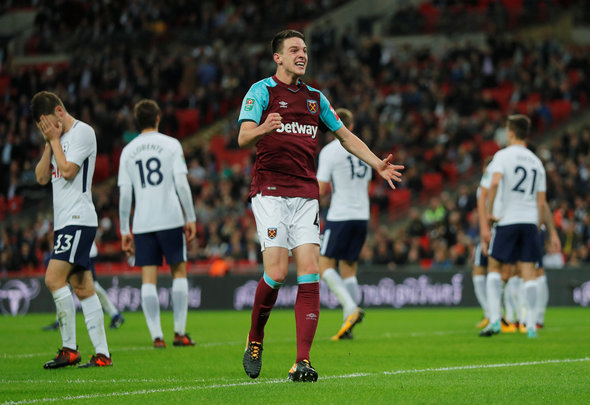 EXCLUSIVE By Pete O’Rourke
West Ham United have rejected multiple loan bids from Championship clubs for defender Declan Rice, Football Insider sources understand.
Rice has caught the eye this season after breaking into the West Ham first-team and has quickly become a favourite of David Moyes, making 16 appearances in all competitions.
A well-placed source has told Football Insider that Sunderland are among the teams who have asked about taking Rice on loan during this month’s transfer window, but West Ham has turned down their request as they want to keep the defender at London Stadium.
Rice has started the last two games against Tottenham and Shrewsbury and has made nine starts in all for the Hammers this term.
West Ham boss Moyes is keen to keep hold of Rice and has ruled out a loan switch this month as he wants to keep hold of the majority of his squad as they battle to avoid relegation.
The 18-year-old is highly-regarded at West Ham and, as revealed by Football Insider in November, the club plan to reward his progress with a new bumper contract.
In other West Ham transfer news, a lethal striker undergoes a medical after standing on the verge of a switch to the Hammers.
We’ve launched a << BREAKING NEWS FEED>> exclusively for your club. ‘Like Us’ on Facebook by clicking here if you want 24/7 updates on all West Ha, breaking news.