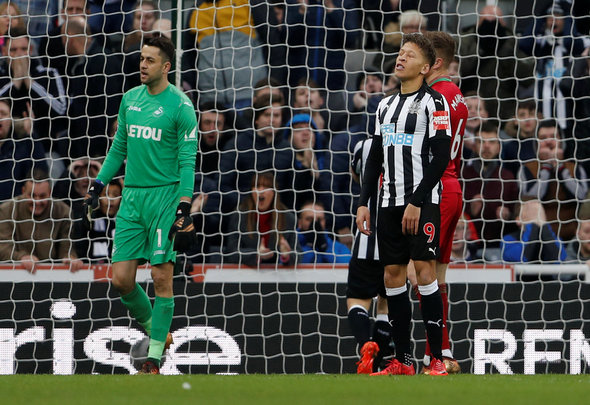 Newcastle fans were not happy with the performance of striker Dwight Gayle in the 1-1 draw against Crystal Palace on Sunday afternoon.
Gayle, the spearhead behind Newcastle’s Championship win last season, hasn’t been able to deliver in the Premier League.
The 27-year-old has managed just three goals in 23 Premier League appearances this season and didn’t look like scoring today.
Newcastle took the lead after a Kenedy corner was poked home by Mohamed Diame in the first half, before a penalty from Luka Milivojevic drew the home side level after 55 minutes.
That’s the way it stayed and it’s a valuable point for Newcastle although they were hanging on at the end.
Newcastle did sign striker Islam Slimani on transfer deadline day, but he wasn’t fit to play today. Nor was summer signing Joselu.
That left Dwight Gayle to lead the line and Newcastle fans were not happy with what they saw.
Here is a selection of the best reactions from weary Newcastle fans on Sunday afternoon:

gayle is bad. he truly can't be arsed.
we should have sold him to fluham on a swap deal for their 17 year old left back

Sad time having to settle for a point at palace should be going to these grounds and be the team on top! Gayle was he even playing ! Midfield not great today #nufc

With Gayle on the pitch it’s like playing wit 10 men. Seriously out of his depth!!

Is Gayle even still on the pitch ? #nufc

Perez could of went up top and Marino into 10, Gayle offers absolutely nothing, no need to take Kennedy off

Such hard work following NUFC. Awful to watch again, Dwight Gayle hopeless. Doesn't even challenge for a ball. At least 2 divisions out of his depth. #CRYNEW

Dwight Gayle, awful. Ayoze Perez, awful. #NUFC tactics, boot it long for 2 weak forwards. Say what you want about the quality of our squad, but Benitez makes many illogical decisions – I wouldn’t be disappointed to see him walk away.

Why take Perez off, at least he’s got some fight about him unlike the invisible Gayle 🤬

In other Newcastle United news, the club tabled a last minute bid to snap up a top flight hitman.