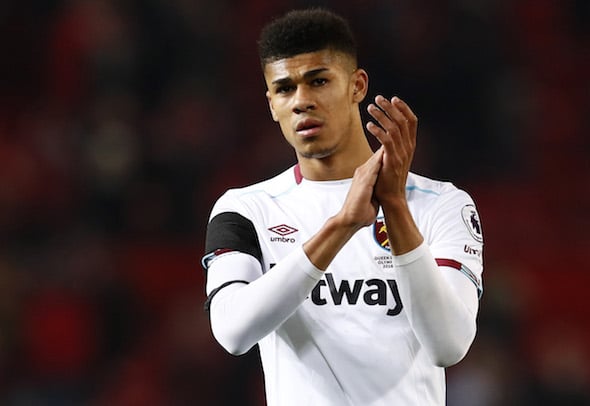 Ashley Fletcher left West Ham’s training camp in Germany on Thursday in order to enter talks over a transfer to Middlesbrough, according to a report.

News outlet Football.London claims that the 21-year-old will cost the Teesiders £7million, despite him only finding the net once in his year-long stay in east London.

Slaven Bilic only recruited the young forward from Manchester United last summer as he put pen-to-paper on a four-year contract, however the Croat is now understood to have given him the green light to enter negotiations with Boro.

Fletcher is said to have slipped further down the pecking order at the London Stadium following the arrival of Javier Hernandez in a £16million switch from Bayer Leverkusen.

Andy Carroll and Diafra Sakho remain Bilic’s other options up front, and although the pair spent most of last season sidelined through injury, Fletcher was not offered the chance to fill their void as he only started two Premier League fixtures.

The one-time England Under-20 international made a total of 20 appearances for the Irons, with his only goal coming in the EFL Cup against his former side Manchester United.

Bleacher Report journalist Dean Jones reported on his personal Twitter account on Wednesday night that Middlesbrough were “close to signing” the forward.

However Football.London quickly followed that report by saying that he was still in Germany with the Irons squad.

It now appears that the potential transfer has developed to the point where Bilic has sanctioned Fletcher’s sale and let him leave his pre-season camp.

West Ham made a lot of silly buys last summer, and although Fletcher’s stats show that he can be considered a flop, he simply wasn’t given the chance to shine by Bilic. Jonathan Calleri was woeful when stepping in for Carroll and Sakho last term, yet the Croatian boss failed to drop him in favour of Fletcher, who after just two starts in the Premier League now looks to be on his way. However £7million is a decent fee to pocket for the Hammers, who need to make up a bit of cash after splurging on Hernandez and record-signing Arnautovic. Bilic now looks to be eyeing up players who are proven in England’s top-flight, which is a lot better that last summer’s policy of signing up bargain-buys from overseas.

In other West Ham news, the Hammers have joined a host of Premier League clubs, included two London rivals, in the race to land this £26.7million-rated international midfielder.