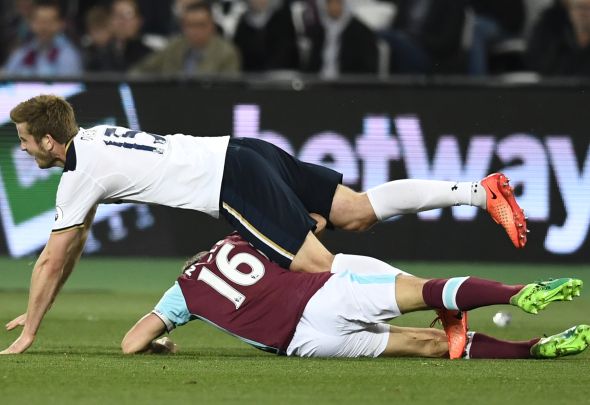 Mark Halsey believes West Ham captain Mark Noble deserved to be sent off against Tottenham for a challenge on Eric Dier on Friday night.

Noble, 29, received a yellow card for a late and forceful tackle on England international Dier, as Spurs suffered a huge blow in their pursuit of a Premier League title by losing 1-0.

Former Premier League referee Halsey claimed that Hammers captain Noble was fortunate to get away with the foul, and believes he was out of control when entering the challenge.

Halsey also claimed in the Sun’s paper edition (Saturday, page 69) that goalkeeper Hugo Lloris could have been sent off for a foul on Manuel Lanzini.

“The challenge by Hugo Lloris on Manuel Lanzini was a really difficult decision for referee Anthony Taylor,” Halsey said.

“In my opinion, the French stopper was lucky not to be red-carded. West Ham captain Mark Noble was also lucky to stay on the pitch after a reckless challenge on Eric Dier.” Noble only received a yellow card for his lunge in the 15th minute, as he played an instrumental part in the middle of the park for the rest of the match as the Hammers earned a 1-0 victory.

Lanzini’s goal midway through the second half proved decisive in the London derby, as the Argentinian slammed home from inside the Spurs six-yard box to earn all three points.

The result could now prove pivotal in Spurs’ Premier League title hopes, with Chelsea likely to extend their lead to seven points with a win over Middlesbrough at Stamford Bridge.

In other Tottenham news, Gary Mabbutt has delivered this verdict on Spurs’ title hopes and believes this is missing.