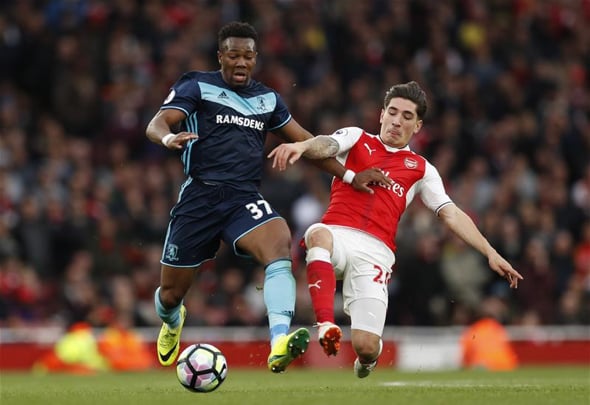 Arsenal fans were given a scare ahead of the north London derby with the news that Hector Bellerin has been added to the list of Arsenal injured after he suffered what Wenger called “a little incident in the last minute of training,”

The news was confirmed on the official Arsenal website on Monday evening.

Wenger did not elaborate but he confirmed that the right-back, along with Theo Walcott, Nacho Monreal and Santi Cazorla have not travelled to Bulgaria for the Tuesday night Champions League match.

Wenger is expected to rest more stars ahead of the huge Premier League game, with Olivier Giroud pushing for a starting place after his two goals in the Sunderland game.

Arsenal fans will be hoping that the injury to Bellerin is not enough to keep him out of the massive derby game with Spurs on Sunday.

The 21-year-old right-back has been a huge part of the Arsenal team this season, playing all 90 minutes in all ten of Arsenal’s Premier League matches.

He has helped Wenger’s team keep a total of four Premier League clean sheets on their way to earning 23 points and a place at the top of the table.

In other Arsenal news, Alex Oxlade-Chamberlain posted this message ahead of the Champions League tie with Ludogorets.