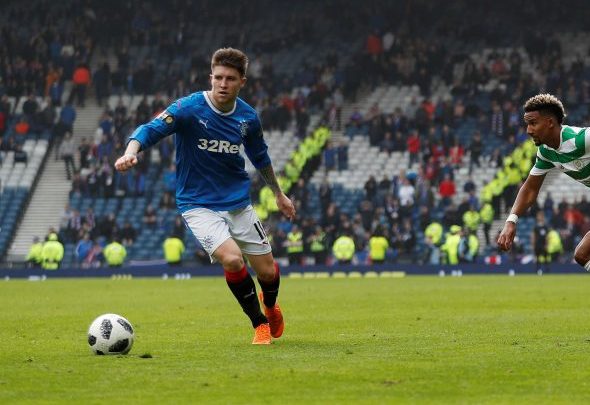 Rangers attacker Josh Windass is coming off the best season of his career, but there could well be a doubt about his long-term future at Ibrox.

The confusion first started when the player’s father – former Aberdeen striker Dean – claimed on Twitter that the 24-year-old had a £3million release clause inserted into his contract.

However, Gers club insiders Four Lads Had a Dream, who have a stellar track record on transfer news at Ibrox, claimed that there is no such release clause in the most recent deal Windass signed.

There is also no bids received

However, the Scottish Sun has reported that Windass ‘liked’ a Tweet which claimed that the clause did still exist.

The report also claims that Cardiff City are interested in signing the player, which adds yet another twist to the proceedings.

There is usually no smoke without fire in these situations, and it could well be the case that Windass could leave Ibrox if the release clause is met.

£3million would be more than decent money for a player who scored 18 goals last season, but the Gers could well feel that he is worth more than that.

It also remains to be seen how important Windass to the plans of Steven Gerrard, if he plays an integral part in those plans he could well stay at Ibrox.

It looks like only time will tell how long Windass’ stay at Ibrox will be, as the release clause has put a real cat amongst the pigeons.

In other Rangers news, a Gers legend has made a big statement about the current Gers side