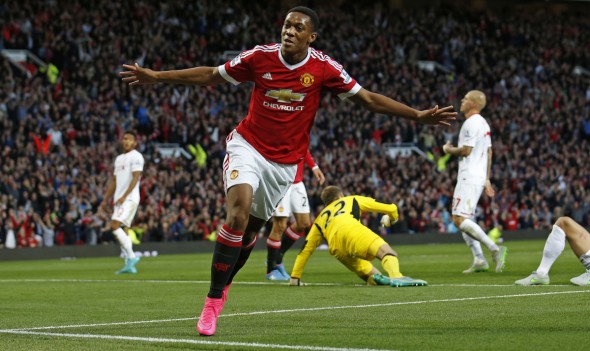 Manchester United favourite Gary Neville believes Anthony Martial is only playing at 85% of his ability and that he “could do anything” if he gave that missing 15%.

The popular Sky Sports pundit revealed his opinion on the Frenchman on the latest edition of The Gary Neville Podcast.

He said: “For someone of his talent, he should be tearing this league apart with his ability.

“Mourinho and the French manager (Didier Deschamps) have turned off of him a little bit, you always get the feeling he’s playing at 85 per cent.

“If he showed that extra 15 per cent, then he could do anything, he’s got everything you’d want: composure in front of goal, great skill, pace, strength, but what is that little bit missing?”

Martial came on as a substitute in the 71st minute of the game against Tottenham, scoring the winning goal ten minutes later to earn his side all three points.

The 21-year-old has been competing with Marcus Rashford for a starting place this season.

Despite this, Martial has scored four goals in nine Premier League appearances, averaging a goal every 67 minutes.

The French international made a big impact for Manchester United when he moved to the side in 2015, after a big money move from Monaco.

The winger scored on his debut against bitter rivals Liverpool and went on to score 11 goals in his debut season for the team.

In total, Martial has now scored 31 goals in 105 appearances for Manchester United, winning four trophies with the side.

However, Neville is convinced the best is yet to come, if the young talent performs to his best every week.

“He takes big moments on and obviously has the temperament to play in big games, but come on, let’s see it every single week,” Neville said.

“He could be a player that could score 20 goals in 20 games if he really wanted to and strived to be the best.”