Noel Whelan believes that Tottenham Hotspur should be eager to send teenage striker Troy Parrott out on loan for the second half of the season.

Speaking exclusively to Football Insider, the former Leeds United forward suggested that the Republic of Ireland prodigy is ready to make the step up to regular senior football.

A Spurs source has told Football Insider that Championship side Charlton Athletic are well placed to take the 17-year-old across London for the remainder of the campaign.

And Whelan has claimed that it would be a smart piece of business from Tottenham to let him go.

When asked whether Parrott was ready to make the transition to regular first team football, he told Football Insider: “I think so.

“He’s not in the plans for Jose – and there is an opening right now because of the injury to Harry Kane.

“He’s very young, very raw still, needs to learn the game, but he’s got so much potential. Very exciting young player, already had a cap with the Republic of Ireland.

“He’s a player I think definitely needs to get out there and be playing regularly.

“Charlton, just down the road, if they’re willing to give him that game time then definitely. Get him out there now.” 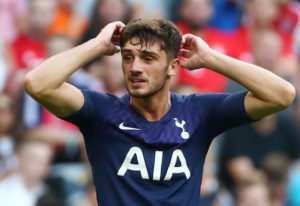 Parrott made his Premier League debut for Spurs in the 5-0 demolition of Burnley back in December, having previously led the line for the senior side in the shock Carabao Cup exit against Colchester United in September.

The starlet also made his senior bow for the Republic of Ireland in November, providing an assist in a 3-1 friendly victory over New Zealand.

In other Tottenham news, Spurs have pulled the plug on a forward deal after extensive talks.