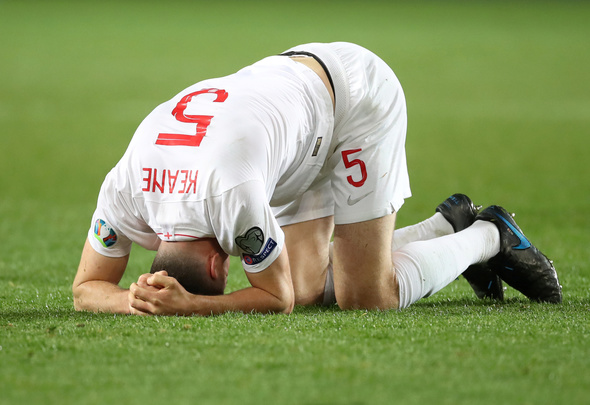 Darren Bent has blasted Everton defender Michael Keane for his “suspect” performance for England against the Czech Republic on Friday night.

Speaking exclusively to Football Insider assistant editor Russell Edge, the former Spurs and England striker says that the 26-year-old has failed to impress for both club and country in his recent outings and that his struggles have continued into the current international break.

Keane was named alongside Manchester United’s Harry Maguire at the heart of the defence for Friday’s clash but was unable to stop the Three Lions slipping to a 2-1 defeat.

Bent says that it was another disappointing performance from the Everton man, highlighting his difficulties back at Goodison Park this season, and suggested that he should be facing the axe for Liverpool’s Joe Gomez.

Bent told Football Insider: “Michael Keane at the minute is having a tough time. For the first goal for the Czech Republic it’s his man that scores, unfortunately.

“He’s marking him, he gets caught out – it’s not initially the first one that’s going to hurt you, it’s the second one, the knockdown and that’s what happened. I think him and England looked suspect all night from crosses and deliveries into the box.

“I’d like to see Joe Gomez come in for Keane, it might be a bit harsh on Keane.”

England’s next outing sees them take on Bulgaria on Monday, the Three Lions having already overcome the eastern European side 4-0 at Wembley at the start of September.

Keane has played in all but one of Everton’s 10 games across all competitions this season, the Toffees sitting 18th in the Premier League after their opening eight matches.

In other Everton news, Bent has revealed to Football Insider how long he feels Marco Silva has to save his job at Goodison Park after their poor start to the campaign.