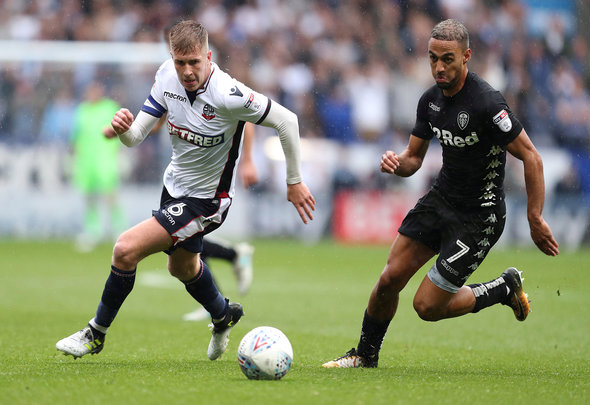 Leeds United manager Paul Heckingbottom has confirmed that Whites duo Ouasim Bouy and Kemar Roofe returned to training on Friday after their respective injury blows.
The Moroccan enforcer, who returned to Elland Road in January after a loan spell at Cultural Leonesa, has not appeared for the club since his signing in the summer, and he had been out of action as a result of cracked ribs.
Roofe meanwhile suffered his blow during the 2-1 defeat at the hands of Sheffield United last weekend, forced off before the half time break after picking up a head injury, which also resulted in him losing a tooth.
However, as quoted on BBC Radio Leeds reporter Adam Pope’s personal Twitter account, Heckingbottom revealed the duo had returned to training in what is a last minute boost for the first team ahead of the clash with Bristol City on Sunday.

Ouasim Buoy cracked some ribs but was back in training. Kemar Roofe returned to training after his head knock at Sheffield United. “He’s been through the protocols.” #lufc

Roofe has been a regular for Leeds this season, being used in both his natural wing role as well as a centre forward, and the 25-year-old has netted 11 goals in his 31 appearances across all competitions this season.
Leeds play host to the Robins having not won a game in either the league or the cups since victory over Burton Albion on Boxing Day, and it has left them sitting 11th in the Championship table, eight points off Bristol City in sixth.
In other Leeds United news, this Sky Sports pundit has claimed Radrizzani make a brutal below-the-belt remark after making a decision.
Don’t miss out on breaking and exclusive Leeds United news by clicking here for our brilliant 24/7 updates on Facebook, Instagram and YouTube.